This unit provides you with a range of opportunities to assess the entry level of achievement of your students.

This unit can be differentiated by altering the difficulty of the tasks to make the learning opportunities accessible to a range of learners. For example:

Some of the activities in this unit can be adapted to use contexts and materials that are familiar to students. For example:

It is expected that students will present a range of prior experience of working with numbers, geometric shapes, measurement, and data. Students are expected to be able to use simple addition and subtraction in situations where sets are joined, separated, and compared.

Talk to your students about the purpose of the unit which is to find out some information about them, so you can help them with their mathematics. In the first session students explore a ‘magic trick’ about dice and extend what they find to develop their own magic trick. Look for your students to generalise, that is, explain why the method works every time.

In this session the theme of mathematical magic is continued as students look for patterns in the place value structure of 100. Begin with a Slavonic Abacus and a Hundreds Board.

In this task students apply place value to explain why a pattern on the hundreds board works every time.

Any square on the hundreds board is magic. The numbers along each axis have the same sum. Why? 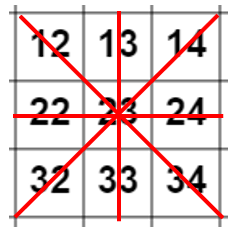 Hopefully more able students can see that this works for the same reason that the crosses pattern works. The for each line, the sum is three times the centre number, with one of the end numbers the same amount more than that number as the the other is less.

Other units that will support the development of Place Value at level 2 include:

In this session students explore simple two-dimensional dissections in which a shape is cut up into smaller pieces and those pieces are put together to form a different shape. They will need square shaped pieces of paper or card.

In this session students consider the likelihood of magic happening. Students will consider whether the trick is really magic or if something else is involved.

You might extend the task by varying the number of cups and treats, e.g. four cups and one, two, or three treats.

In this session students look for repeating patterns and connect elements in the pattern with ordinal numbers.

There are many ways to increase the difficulty of repeating pattern prediction:

For the first week of school our mathematics unit is about mathematical magic. We will investigate number tricks, magical change a square into other shapes, predict the future of a pattern, explain and justify why things work.