The purpose of this unit of sequenced lessons is to develop knowledge and understanding of the place value structure of the numbers from ten to twenty.

When students meet ten they meet a two-digit number for the first time. They begin to become aware that there are no more numerals to learn and we just ‘recycle’ them. This is their entry into the structural world of our tens based number system.

They are introduced to the language of digits, place and value. It is a considerable conceptual shift for children to move from a face value understanding that a numeral represents a number of units that can be counted, to a place value understanding in which a numeral can represent a group or a number of groups that are in themselves made up of units that can be counted. This is is a complex idea.

As children study teen numbers and their meaning and structure (rather than simply ‘saying’ them in a counting sequence), the focus is on developing the understanding that the value of a digit depends on its place. This is not trivial and it is made more challenging by the language of teen numbers.

Children often confuse the number names such as ‘fourteen’ and ‘forty’ because the adult enunciation of the word endings is often unclear. In hearing ‘fourteen’ children may expect to see the 4 appear first in the symbolic form because that is the number that comes first when they say it. Seeing 14 and hearing ‘four – teen’ therefore has the potential for confusion.

Children need many opportunities to make these numbers with materials. When using place value material for the first time, children need the opportunity to group single units to make one ten. By doing this they come to understand that ten ‘ones’ or units do in fact comprise one 'ten'. The first equipment to use therefore is that which can be physically grouped, one by one, to make or compose one group of ten, or a ‘ten’, and be able to be unpacked or decomposed again into ten ones. When this is complemented by symbolic recording that accurately matches the representation of the number, understanding of two-digit notation is developed. Equipment in which the tens are already pre-grouped can be used once grouping to make ten is well understood.

It is a considerable shift for children to then use materials in which the ten looks completely different from the ones (for example, money) and to trust the 'ten for one' trade. The greatest abstraction is of course the digits in our number system where the tens and ones look exactly the same but it is only their place that tells their value.

In depth exploration of place value with teen numbers is essential if our students are to work with real understanding of the numbers within our number system.

The activities suggested in this series of lessons can form the basis of independent practice tasks.

Links to the Number Framework

The learning opportunities in this unit can be differentiated by providing or removing support to students and by varying the task requirements. Ways to differentiate the tasks include:

Using the place value language structure within Te Reo Māori to develop and reinforce the understanding that teen numbers represent “ten and” is an adaptation that supports Te Reo, the identity and language of Māori students, and the conceptual understanding of teen numbers.

Have the students work in pairs to play Teen Pairs.
(Purpose: to recognise and match teen number representations and the words ‘ ten and ____’)

Students take turns to turn over one tens frame teen number card and say the number of dots they see. They then turn over a word card and read the words aloud. If the tens frames and word card match they keep the matching pair and the winner is the student with the most pairs.

If available, have the students work in small groups or pairs to explore, find and display the four matching cards in the BSM 9-1-48 card game. 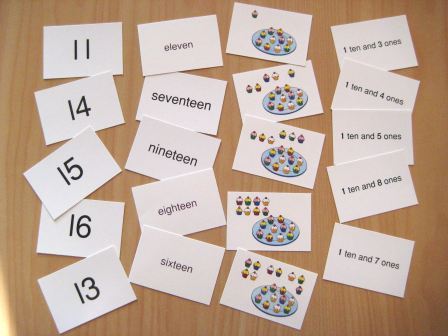 Alternatively have the students make a class puzzle matching game. Provide each student with card, pens and scissors. Have them make their own puzzle pieces which can then be combined with those made by their classmates and mixed up to make a matching pairs game.

Students play Go Teen in pairs.
(Purpose: to use ten ones to make one group of ten when adding add two single-digit numbers.)

Students have playing cards (ace - 9), shuffled and face down between them. They have single beans and empty tens containers (or single nursery/ice block sticks and hair ties), single digit and tens arrow cards available.

The players take turns to turn over two playing cards. When the two numbers are added, if they make less than ten they return them face down to a discard pile.

If they make more than ten they keep their playing cards, take the total number of beans, group the materials showing the total as 1 ten and units. They also show the number with the arrow cards.

However, if the number has already been made by their partner, (the arrow cards for that number have been used) the student must simply return their playing cards to the discard pile.

The winner is the player with the most tens (containers with beans) when all the arrow cards have been used up.

In class in maths this week we have been learning about teen numbers and how they are made of ten plus a single digit number. For example thirteen is 10 + 3. We have also been introduced to place value, learning that the 1 in 13 is in fact one group of ten.

You can help your child practice this very important idea by playing the game, Teenager match.

Cut up the attached page to make separate cards. Spread them face down on the table. Take turns to choose a pair of cards. If they match, keep the pair. The winner is the person with the most pairs.

[Include a copy of Copymaster 5]