This activity has a logic and reasoning focus. 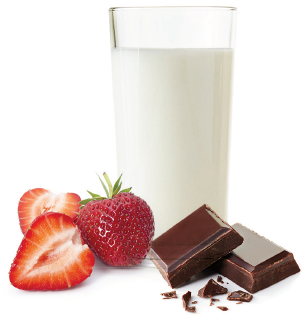 Hannah has a square milk crate that would hold four cartons.

In how many ways can she fill it with cartons of strawberry and chocolate milk?

The Strawberry Milk problem precedes  and lays the foundation for this lesson. The two main ideas introduced there and reinforced here are counting all possible arrangements, and noticing that some of these arrangements are ‘alike' and so might be considered to be the same.

The first part of this problem has students following these steps:

The students should be encouraged to try to find a number of answers and to reach a point where they have some systematic idea as to why there are no more answers. There three important skills that are fundamental to all of mathematics (and maybe life itself); first being able to find some possibilities, then getting all possibilities and then justifying that there are no more. We work through this sequence in the Solution.

The second idea in this problem is symmetry. This involves noticing that turning some arrangements of the milk cartons through quarter turns, will give another arrangement. The two arrangements  are said to be ‘alike'. The aim is to find such arrangements, put them into groups and find how many such groups there are. This will confirm the number of different arrangements, or the number of groups that are not ‘alike'.

The problem includes probability elements of Statistics and the rotational symmetry aspect of Geometry.

There is a web site on the no-three-in-line problem. Its url is www.uni-bielefeld.de/~achim/no3in/readme.html. This is still an open problem in mathematics and has an interesting number of sub problems relating to symmetry.

Hannah has a square milk crate that would hold four cartons. In how many ways can she fill it with cartons of strawberry and chocolate milk?

Suppose that Hannah has a 3 by 3 crate. In how many ways can she fill the crate with two cartons of strawberry milk and seven cartons of chocolate milk?

Students may approach this unsystematically at first. This is what you could expect at step (i) of the process of finding all answers. So they will probably find several ways of putting the cartons into the crate but not be sure that two of them could be considered to be the same and not be able to see why there are no more.

What crate arrangements are ‘alike'? (see Strawberry Milk, Level 1). We can think of the two filled square crates below as being alike because it is possible to rotate one around through a quarter turn, until it looks exactly the same as the other.

This should provoke a discussion. Are there other ways of filling the crate that look the same as the one above? You might list these in a column one under the other. There are four possible arrangements that could be in this column.

So, if we decide that these four are all the same then there are only 6 ways of filling Hannah’s crate. These are shown below.

Then suppose that there is one chocolate bottle. There is only one case here too because the four possible contenders are alike. They can be rotated into each other.

Being systematic we get the eight possibilities below.

The system here is achieved by first putting a strawberry bottle in one corner and seeing where the other one can go without repeating a situation that has occurred before.

When that case has been exhausted, put one strawberry bottle in the middle square along an edge and then move the other one around.

The only position left for the first strawberry bottle is the centre position. However, there is then no square to put the other bottle in that hasn’t been used before. Hence there are only eight possibilities here.