In this unit students learn to use two different two-dimensional drawings to represent three-dimensional shapes.

The first type of drawing is the use of plan views. These views are usually from the top, front, and side, as you would see in house plans. Such views are called orthogonal, meaning that the directions of sight are at right angles to each other. Here is an example of plan views. 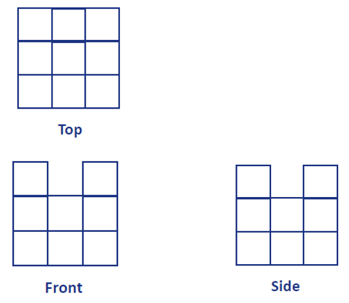 The second type of drawing is perspective, using isometric paper. True perspective shows objects getting smaller as they are further from the point of sight. Iso means “same” and “metric” means measure, so isometric paper shows every cube as the same size. Therefore, an isometric drawing shows a three-dimensional model from a single viewpoint, and distorts the perspective the eye sees. 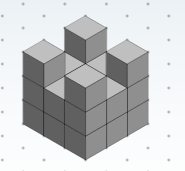 In this unit students also work to develop flat patterns (nets) for simple solids, such as pyramids and prisms. A pyramid consists of a base, that names the solid, and triangular faces that converge to a single vertex, the apex. A hexagonal-based pyramid has a hexagonal base and six triangular faces. A prism has two parallel faces, that also name the solid, and parallelogram shaped faces. In right-angled prisms those faces are rectangles. Therefore, prisms have a constant cross-section when ‘sliced’ parallel to the naming faces. 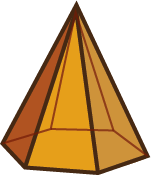 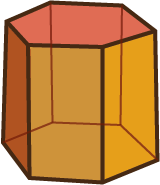 The flat surfaces of a three-dimensional solid are called faces. All faces must be connected in a net, the flat pattern from which the solid can be built. However, not all arrangements of faces will fold to the target solid. In the net for a hexagonal pyramid there needs to be one hexagon and six triangles, arranged in a way that means when folded there are no overlapping and no missing faces.

The learning opportunities in this unit can be differentiated by providing or removing support to students, and by varying the task requirements. Examples include:

The contexts for this unit can be adapted to suit the interests and cultural backgrounds of your students. Select three-dimensional structures that are meaningful to your students. Mathematical solids are often used in construction, such as the shape of traditional Māori food stores (Pātaka), climbing equipment in playgrounds, and iconic structures around the world, e.g. pyramids of Egypt, high rise buildings.

Before class gather at least five different shaped objects from around the classroom. The objects might be mathematical models (e.g. cube, pyramid, sphere, etc.) or common objects (book, cone, bottle, box, etc.) or a combination of things. It is better if the objects are different heights.