This unit builds the learning of mathematics around celebrations of Matariki, the Māori New Year. The sessions provide meaningful contexts that highlight Māori culture and provide powerful learning opportunities that connect different strands of mathematics.

Session one involves subtracting single digit and two digit numbers starting at 200. As students take handfuls or counters from their waka they will need to anticipate how many counters remain. Students will use need to use place value to calculate in ways other than counting back. The session notes recommend using a linear model for representing the calculations. A bead string is ideal and can be mounted along the edge of a whiteboard so jumps can be recorded on the whiteboard.

The session notes recommend linking two strings end on end to form a line of 200 beads. An important strategy in the activity is ‘back through ten’. For example, a student has 93 counters left and removes a handful of 17 counters. How many do they have left?

On the bead string this calculation can be modelled like this:

93 – 7 can be carried out in two steps, take away three to get to 90 then take away four to get to 86. This is a ‘back through ten’ strategy so it applies to using any decade number as a benchmark. Of course a student might take away a the ten of 17 first.

Session three involves dealing with like measures, e.g. dividing or multiplying weights. Actually measuring objects with devices like kitchen scales is important to the development of students’ understanding of the measurement system. For example, students will need to find out how many kilograms of kūmara will need to be ordered for the hāngi. If possible bring a few kūmara along so students can experiment to find out how many kūmara make up one kilogram in weight. They will then need to use division or multiplication to calculate how many kūmara they need. So if 24 kūmara are needed and four kūmara weigh one kilogram then 24 ÷ 4 = 6 kilograms will need to be purchased.

Session four develops important geometry ideas out of whai (string figures). A common issue with the learning of geometry is that students form prototypical views of shapes. For example, they might consider an equilateral triangle to be the only shape that is a triangle. All of the shapes below are triangles:

The issue of prototypical ideas will also apply to other polygons such as hexagons and octagons.

These three shapes are all hexagons. Note that the bottom hexagon is concave as it has two internal angles greater than 180°. It is important to discuss the defining characteristics of a class of shapes like hexagons. The only required property is that the shape is closed by six sides. 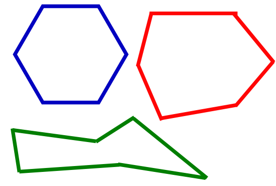 Session five also involves an important mathematical idea, distinctness. Rotating or reflecting a shape does not change its properties, except orientation (direction it is facing). The idea is fundamental to determining if given shapes are similar or different. For example, all of the quadrilaterals below are similar even though they look different. They can all be mapped onto each other using translation (shifting), reflection (flipping), and rotation (turning).

Similarity is applied in Session Five by looking for different winning positions. If the positions are reflections or rotations of one another then they are not considered to be distinct.

The activities are mostly open ended so they cater for a range of achievement levels. It is expected that students have some experience with naming and classifying basic geometric shapes, with measuring weight in kilograms, and with translating, reflecting and rotating shapes. They should also have place value knowledge to 200.

Matariki is a time of cultural pursuits and feasting to celebrate the New Year ahead. The hāngi or earth oven has particular significance at the time of the new moon after the rise of Matariki in the Eastern pre-dawn sky. Matariki is the star at the bow of Te Waka o Rangi and her travels around the sky for eleven months of year are exhausting. It is said the steam of the first hangi in the New Year rises into the sky and replenishes the strength of Matariki. From the offerings she gathers strength to lead the giant canoe for another year. Without Matariki at the bow the canoe cannot travel and Taramainuku cannot cast his net to gather the souls of the departed. At the New Year the names of the dead are called out so the souls of the departed may be cast into the heavens as stars.

There are many resources already available about hāngi.

“Preparing for the hāngi” is a Level 3 activity from the Figure It Out series.
“Hanging out for hāngi” is a unit at Level Three that develops a statistical investigation around deciding which foods to cook.

The notes below are an adaptation more suitable for Level Two students.

Matariki was a time when food was already stored, and it was cold outside. So whānau (families) spent time together engaging in cultural pursuits such as storytelling, arts and games. Whai (string games) were popular with tamariki (children) and adults alike, especially when they involved co-operation. Whai has a long history and is common to many indigenous cultures around the world, including the indigenous tribes of North America. So if instructions tell you to “Navajo your thumbs” that means a common move that is attributed to a tribe of indigenous Americans. Traditionally whai was played with twine made from flax. The best man-made fibre to use for whai is nylon since it slides and flexes, and is soft on your hands. It commonly used to form lines for brickwork so is available at most hardware stores in a variety of colours. Nylon string is also available in craft shops.

In this session students learn to play the traditional Māori game Mū Tōrere which is like a form of draughts. The original game is sometimes referred to as the wheke (octopus) game or the whetū (star) game due to the shape of the board. It is appropriate that students learn to play the game at the time of Matariki, since the Māori New Year is a time of engaging in cultural pastimes. The board (see Copymaster 5) has been altered to include the nine or seven stars of Matariki, dependent on the version of the game that is played.

This week we are exploring some mathematical ideas with activities to celebrate Matariki, the Māori New Year. We will be learning the legend of Tamarereti and using that story to learn about numbers of bright stones. We will look at the phases of marama (the moon) to find the best days to go fishing in the New Year period, plan and cost a hāngi, and discover geometry in whai (string patterns). Lastly we will learn to play Mū Tōrere, a traditional Māori game that takes a lot of strategy to win.

These activities involve number, algebra, geometry, measurement and statistics so we will be very busy and doing a lot of mathematical thinking.