Fractions are an extension of whole numbers and integers. Fractions are needed when wholes (ones) are not adequate for a task. Division often requires equal partitioning of ones. Sharing two chocolate bars equally among five people requires that the bars be cut into smaller equal parts. The operation might be recorded as 2 ÷ 5 = 2/5. Note that the number two fifths, is composed of two units of one fifth. In practical terms the equal share can occur by dividing each of the two bars into fifths, then giving each person one fifth from each bar.

If the bar was made up of ten pieces then each person might be given two tenths from each bar, giving them four tenths in total. Four tenths are the same quantity of chocolate as two fifths. Any fraction can be expressed as an infinite number of equivalent fractions that represent the same quantity and occupy the same position on the number line.

Fractions are important to measurement, especially where whole units are not precise enough for the purpose. The symbolic expression does not explain why equivalent fractions represent the same amount. Consider these equivalent fractions: 2/3 = 4/6 = 8/12 . A fraction strip (length) model of the relationships looks like this: 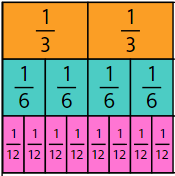 Sixths are half the size of thirds so twice as many sixths fit into the same length as thirds.

Twelfths are quarter the size of thirds so four times as many twelfths fit into the same length as thirds.

The relationship between two thirds and eight twelfths can be represented in this equality.

Four times as many twelfths comprise one as thirds. Therefore, each third can be divided into four twelfths.

Understanding equivalent fractions is critical to making sense of decimals and percentages. Consider the names for 3/4 = 0.75 = 75%. Both 0.75 and 75% represent 75/100 which is an equivalent fraction to 3/4. If each quarter is equally partitioned into 25 parts, those parts are called hundredths since 4 x 25 of those parts fit into one.

The learning opportunities in this unit can be differentiated by providing or removing support to students and by varying the task requirements. Ways to support students include:

Adaptation involves changing the contexts used for problems to meet the interests and cultural backgrounds of your students. Where contexts such as food and ratios of orcas and dolphins may not be appropriate for your students, find other situations likely to engage them. Birthday Cakes might be replaced by areas of land, dart boards, or gold coins. Orcas and dolphins might be replaced by other animals that need conservation. Linear models are easily applied to journeys that students make, or physical objects such as tape and rope.

Is there a change in the fraction for each creature comparing July to January? Same

Is there a change in the fraction for each creature comparing July to January?       Same

Is there a change in the fraction for each creature comparing July to January?       Same

This week we are learning about equivalent fractions that are different ways to represent the same amount. For example, one half (1/2) of a birthday cake is the same amount as two quarters (2/4) or four eighths (4/8). We can write the equivalence as 1/2 = 2/4 = 4/8.

Ask your student to explain how he or she compares the size of two fractions with different denominators. For example, “Which fraction is greater 2/3 or 3/4? How much greater?”

Some other links from the Figure It Out series which you may find useful are: