What's going on? Properties of multiplication and division

This unit develops students’ recognition of pattern (consistency) in equations involving multiplication and division with whole numbers. The patterns of pairs of equation embody important properties of multiplication and division, such as commutativity, distributivity, and inverse. Students learn to represent specific examples where the properties are used then provide convincing arguments about why the properties hold in all circumstances.

An important consequence is that students learn to consider variables as generalised numbers, and express relationships involving whole numbers under multiplication and division.

In this unit we build on research by Deborah Schifter, and colleagues, about the development of algebraic thinking. Shifter works for The Educational Development Centre, a non-profit research organisation in USA. Her approach follows several steps that can be linked to ‘folding back’ in the Pirie-Kieren model of conceptual development, that is commonly used in New Zealand classrooms.

The phases of the approach are as follows: 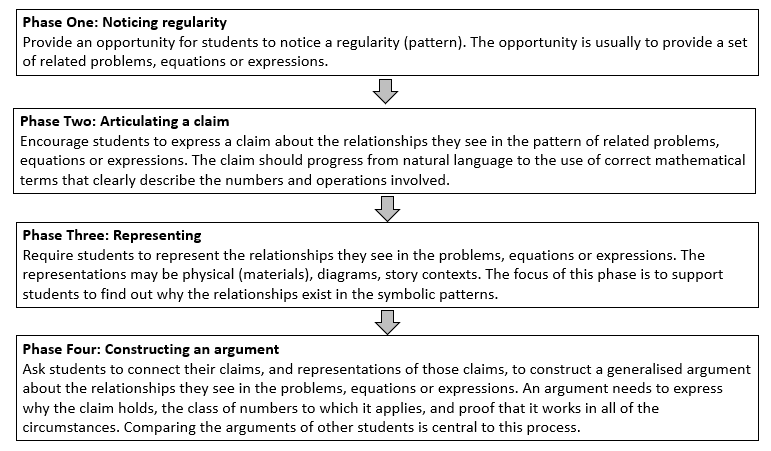 In this unit claims are developed through equation sets involving multiplication and division. The sets aim at developing students’ understanding of the properties of multiplication (commutativity, distributivity, associativity, identity and inverse). By expanding the equation sets to include division students will learn how these properties hold or do not hold when the operation is changed.

The learning opportunities in this unit can be differentiated by providing or removing support to students and by varying the task requirements. The difficulty of tasks can be varied in many ways including:

The contexts for this unit are strictly mathematical but the materials used can be adapted. Physical items that have significance to your students might be better used than standard mathematical equipment. For example, if you have a big set of shells for environmental studies you might use those shells as the materials Contexts may fall out of the preferred materials. Kaitiakitanga (guardianship over the environment) might be supported by finding clever ways to count the number of toheroa on a beach. Whānaungatanga (family) values might involve finding fair and equitable ways to share shellfish that are harvested. Note that equal shares assumed in the operation of division are not always aligned to values of fair sharing.

All lessons in this unit follow the same sequence of phases as given in the diagram above. A poster of the phases is provided as Copymaster One for students to refer to. The notes suggest possible student ideas and teacher reactions to those responses. It is not feasible to anticipate all ideas students might give so you are encouraged to be flexible in how you respond to students rather than ‘teach’ the sample ideas and representations provided.

PowerPoint One contains seven equation sets that drive the unit. The sets might form the basis of a week-long unit. The phases for each equation set are described below. The sets are labelled in the top left corner of each slide for reference.

Slide one has the first pattern to look at. The pattern involves the commutative property, i.e. a x b = b x a, which students should be familiar with. It is used as an example to familiarise students with the approach.

Ask the students to approach the second equations set more independently. From this point each equation set is discussed succinctly using the phases of the approach.

Use set seven as an opportunity to see how well students engage in the generalisation process independently. Ask them to record their claims, representations, and arguments in ways that work for them. Some students may prefer writing their work while others may prefer to capture their ideas using a digital recording.