The truth about triangles and squares

This unit explores some of the algebra involving triangular and square numbers.

Triangular and square numbers belong to a family called the figurative numbers that arise from the shapes formed by particular numbers of objects. Figurative numbers are believed to have originated from the Pythagorean society of ancient Greece (c. 550-350 BC).

Both triangular and square numbers occur frequently in the natural and man-made world. They are very useful. Triangular numbers commonly arise in probabilistic situations, most notably in establishing the number of combinations for a set of objects. Square numbers are the simplest example of a quadratic function. Quadratic functions are used frequently to model real world situations, such as paths of balls in sport, braking distance of cars, and structures of suspension bridges.

Show the students slides one and two of PowerPoint One. Students are asked if the stacks contain the same number of cubes and how they counted the cubes.

Discuss the methods they used like adding the layers 1 + 2 + 3 + 4 = 10.
Comment that ten is a triangular number since it forms a triangular pattern.

Challenge the students to draw a triangular stack that is five cubes high.

Slide Four has the fifth triangular arrangement. Students may just add five to the original four-high triangle. You might record the sum of the layers as 1 + 2 + 3 + 4 + 5 = 15.

Let the students discuss the question in pairs. Since the growth is not linear (different numbers of cubes added for each layer) the number of cubes in triangle ten will be more than 30.

Allow the students access to cubes or counters if need be but encourage them to use mental arithmetic to find a solution. Discuss ways in which they solved the problem.

Encourage the students to use the same forming pairs strategy for the tenth pattern.

Let the students use cubes or counters to show how the tenth triangle can be transformed into a rectangle. Slide Six shows the transformation as an animation.

Discuss what patterns they can see that allows them to work out the next number without making the figure with counters. Note that the pattern goes:

Slide Seven tells the story of Carl Frederick Gauss when he was a child aged ten. You can find excellent videos of the story online by searching “Gauss addition” but be sure to stop the video before Gauss’s method is shown.

Challenge the students to find the 100th triangular number, i.e. the sum of the counting numbers to 100:

Use Slides Eight and Nine to introduce the pattern of square numbers. For each picture on Slide Eight, ask your students to work out the total number of objects.

Students should notice that each picture shows a square number of objects.

Do your students recognise that multiplication can be used to shorten repeated addition?

Revisit the set of triangular numbers. PowerPoint Two, Slides One and Two, introduces an investigation. Students may not know the meaning of consecutive as ‘next to each other.’

Ask the students to find the sum of consecutive triangular numbers up to ten, and organise their results in a systematic way. For example:

Ask the students to describe any pattern they see and record it as a claim. For example:

Claim One: “If you add any two consecutive triangular numbers, the sums go even, odd, even, odd,...”

Claim Two: “If you add any two consecutive triangular numbers, the sum is always a square number.”

Suggest to the students that they need to come up with a way to convince others that their conjecture is true. Their arguments might use specific examples but should be generalisable across all cases. For example:

Claim One: Triangular numbers go in this pattern:

Note that this argument is based on induction, the idea that if a pattern for a sequence holds true, it can be generalised infinitely to further members of the sequence.

Claim Two: Triangular numbers of objects can be arranged as right angled triangles. If you put two consecutive triangles together they form a square.

Students usually start with observations, that every pair of consecutive triangular numbers they try sum to a square number. They may provide an extensive list to show this, hopefully using a spreadsheet.

In mathematics, a large set of results suggests a relationship holds, but is not conclusive proof. Only one counter-example is needed to show the relationship is not generalisable. To prove the sum of two consecutive triangular numbers is always a square number algebraically requires techniques taught at Levels 5 and 6. However, a geometric proof is very accessible.

Slides Three, Four and Five of PowerPoint Two show examples of representing the sum of triangular numbers geometrically. For example:

This may lead to the generalisation of what occurs for any pair of consecutive triangular numbers.

Slide Six shows the process for any triangular number, ∆n+∆n+1.

Require the students to be more specific in terms of expressing their generalisation.

If you know the value of n for the first triangular number, e.g.  ∆n=∆10,
can you predict the sum (square number)?

Use specific examples, to encourage students to describe the link between triangular numbers and square numbers, e.g. 10 + 15 = 25 so ∆4+∆5=52.  Ask them to express their ideas in words and symbols, such as:

If the triangular numbers are the tenth and eleventh, then the sum equals eleven squared. A set of results may help students see the general pattern.

Slides Six and Seven provide some problems where a square array is divided into consecutive triangular numbers.

Try to figure out the number of dots in each red and yellow triangle, using the information, and your list of triangular numbers. Try not to count dots.

Use Copymaster 1 to provide the students with a sequence of problems related to square numbers. Allow the students to solve the problems independently or in small co-operative groups. Assemble the class to discuss the common features of the problems.

Problems one and two both contain geometric patterns in which an odd number of triangle or squares is added to the previous pattern. Consideration of the layers in the triangular pattern shows that one, then three, then five, then seven triangles are added. This is the property of the sequence of square numbers found in lessons one and two. Students should realise that the tenth square number is 100 so the large triangle would have sides of ten units.

Similarly, rearranging the staircase patterns shows that they can be reformed into squares. For example, here is a reformation of the 4-high staircase.

The number of small squares found in a 15-high staircase would be the fifteenth square number (15 x 15 = 225).
The garden problem (Problem Three) also involves square numbers, as students should detect from the 36m2 and 64m2 square fields. The problem requires connections to the square root, that is the side length that produces a square of given area. So the length of a side in the 49m2 plot is 7 metres since √49=7.

Comparing the side lengths of the given squares 6 metres and 8 metres suggests that the small plot adjacent to them must have a side length of 2 metres (area 4m2). By working systematically students should get to this solution. 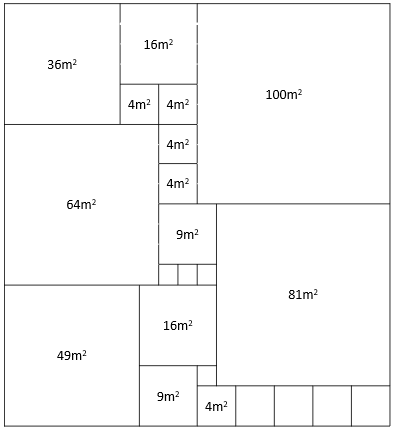 In Problem Four students should recognise similar number sequences in the “Dance till You Drop” competition. If someone dances for twenty-four hours the last hour will be worth $47 and they will receive a total of 242 (twenty-four squared) dollars. That is $576.
For problem five students will need to be aware that there are different sized squares involved and this is helpful in systematically finding them all. Consider the 4 x 4 checkerboard.
Counters can be used to mark the centre of each square as shown below.

…and the large square itself.

The same reasoning used in Problem Four can be used to work out the total distance. Since the sum of consecutive odd numbers the distance to each cone is always a square number:

Cone A is 1 metre from the start

Problem two involves a pattern in which the next distance in the spiral is the previous distance plus one metre. Students should recognise that this pattern of differences is found in the triangular numbers. Since the last ‘leg’ of the spiral is 14 cm long, they should look for the 14th triangular number which is 105 cm.
This pattern is less recognisable in problems three and four that involve combinations. In the icecream problem each new flavour creates an extra number of icecreams equal to the previous number of flavours plus one. For example, combining Uncool with the other flavours X, Y, and Z, gives four more possible icecreams. They are XU, YU, ZU, and UU. The next flavour Vex will combine with the others to create five more double scoop icecreams XV, YV, ZV, UV, and VV. The total number of possible icecreams will be the sum of 1 + 2 + 3 + 4 + 5 + 6 = 21 (the sixth triangular number).
Similar reasoning can be used to solve the other two problems. Each new town creates the need for a number of roads that is equal to the number of existing towns. Consider the addition of the first new town, Dag, results in three new roads, AD, BD, and CD. 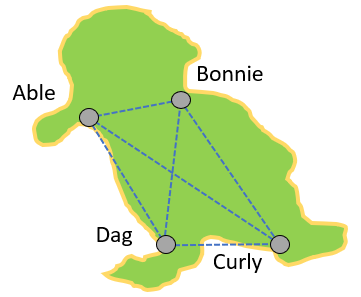 Problem Six is a geometric application of triangular and square numbers. There are four identical white spaces that are stairs. Each stair can be partitioned into two triangles which can also be remembered as forming a square. 15 + 21 = 36, the sixth triangular number. There are four empty spaces so the area not shaded equals 4 x 36 = 144, which is also a square number. 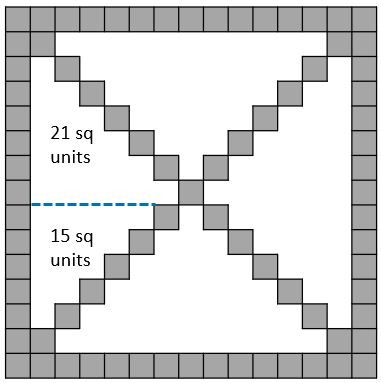 In this session students apply their knowledge of triangular and square numbers to solve problems with sequences. PowerPoint Three drives the lesson.

The first sequence of problems is aimed at students creating a general rule for triangular numbers. Show Slide One. Invite your students to find out how many apples are in the rectangular stack. Share their ideas.

Slides Two and Three show two ways to solve the problem, by multiplication of sides, and by partitioning into triangular numbers. Slides Four to Six provides a simpler example, 5 x 6 = 30 in total, 2 x 15 = 30 (two times a triangular number).

Let your students work in small groups on Slides Eight, Nine and Ten. Solutions are below.

This pattern is the set of triangular numbers. The table of values is:

Students might partition the figures in various ways to solve the problems. One way is to separate the figures into square and triangular numbers.

As a final problem pose this challenge (See Slide Eleven):

What is the smallest number of apples that need to be moved to change this triangular pattern into a square pattern? 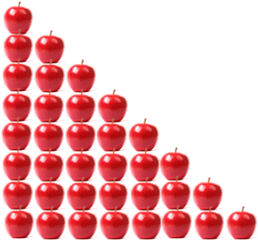 This triangular pattern can be changed into a square by moving only a few apples.

Students may realise that the figure has 36 apples that could be used to form a 6 x 6 square pattern. 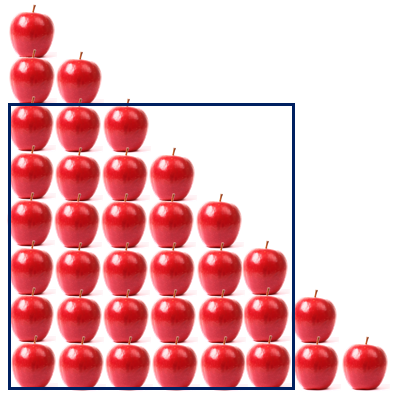 Superimposing the size of a 6 x 6 counter square over the triangular array reveals that only six apples need to be moved.