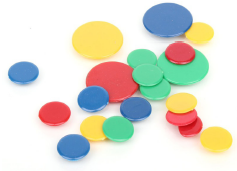 Place twenty-one counters in a row.
With a partner take turns, removing one, two or three counters each turn.
The person to remove the last counter is the winner.

Is "Take three or fewer" a fair game? (In a fair game, each player has an equal chance of winning.)

This is an open problem presented as a game that involves decisions and fairness.  Students learn that if it is fair, then it doesn’t matter who starts and each player is equally likely to win. If the game is not fair, then a decision must be made about who will win, the first player or the second player. By playing a number of games students have the opportunity to begin to see a pattern, and to identify a strategy.

A very similar problem is Take Two, Algebra Level 3.  As this is easier, you may want some of your class to try it first.

Have students play the game without counters, keeping track of their moves mentally as they subtract one, two or three. Whoever can go to zero, wins.

A good problem solving strategy is to try a simpler problem. If your students haven’t done the problem Take Two (Level 3, Algebra) and they are having trouble with this present problem, then we suggest they try Take Two first.

The strategy here is very similar to that in Take Two. In Take Three, if only one, two or three counters are left, then they can be removed for a win. On the other hand, four counters is a losing position. The next losing position is eight as a pile of eight can be reduced to four by the second player no matter what the first player does.

Solution to the extension