Algebra started with the need to solve problems. Al Khwarizmi, a Persian mathematician, was arguably the first person to represent linear and quadratic problems in symbolic form and solved the problems by processes of ‘restoration’, i.e. equivalent operations that conserved equality. In fact, the word for algebra comes from the Arabic word for restoration.

It is fitting then that modern approaches to algebra focus on the thinking that underpins the symbolic systems. Algebraic thinking is concerned with generalisation. Letters, words, tables, graphs, networks, etc. are cultural tools that enable us to represent, then think with, those generalisations. With representational tools we are capable of ‘amplified cognition’ in that we can anticipate results that would never be possible if we relied solely on the physical environment, and on our limited capacity to process ideas just mentally.

Generalisation begins with noticing patterns and structures. A pattern is a consistency, that is something that occurs in a predictable way. It is the ‘what’ of algebraic thinking. Structure is about the organisation of patterns. It is the ‘how’ and sometimes the ‘why’ of generalisation. From noticing pattern and structure, we develop properties. For example, early counting involves pattern and structure. The ‘fourness’ of a collection comes from noticing sameness among collections of four, irrespective of the size, colour, texture, etc. of the objects. Structure of counting involves ideas like the order of counting the objects doesn’t matter.

In upper primary school, learning experiences for algebraic thinking typically begin with patterns. Usually these patterns are spatial and may be connected to some meaningful life context, though number patterns are also rich in opportunity. Patterns involve variables, that is features, some of which can be quantified. For example, consider this simple spatial pattern.

Among the variables we might discern that the ‘tower’ has height and each ‘tower’ is made of some number of squares. Height and number of cubes may not be the only variables, just those we notice. Variables change, that is height varies and so does the number of squares in the ‘tower’. We might try to find a relation between the variables, describe and represent that relation, and use it to predict how the pattern grows beyond what we can see. Then we are thinking with the properties and representations in a sophisticated way.

On the way it is likely we will need to organise the data from the pattern systematically. A table of values is a productive generic strategy, so we represent the pattern like this:

The danger in moving to an organised numeric strategy like a table too early is that it may negate what we can ‘see’ in the pattern visually. Noticing and reasoning may be inductive, that is tied to the incremental change of the figures. For example:

Noticing and reasoning can also be abductive, that is based on the structure of one example.

Noticing and reasoning can be deductive, that is based on making assumptions about structure and reasoning with the assumptions. For example, we might assume that the tower is composed of an array of something multiplied by three plus two.

From the assumptions we might deduce the appearance of towers much further on in the sequence, e.g. A tower 100 high will contain 2 + 99 x 3 squares. Ways of ‘seeing’ the pattern are manifest in relations within the table of values. For example, inductive thinking leads to seeing the values in the bottom row increasing by three each time. Abductive reasoning might support seeing this relation in the table:

Representing the relation as an algebraic equation involves two important and connected types of knowledge, related to the language conventions (semiotics), and to the nature of variables. We might write s = 3h – 1, or s = 3(h - 1) + 2, or s = 2h + (h – 1), depending on what we notice. The equations are meaningless to anyone else unless we clearly define what the variables, s and h, represent. Note that both and s refer to quantities that vary and are not fixed objects, such as houses or towers. Quantities are a combination of count and measurement unit. In this case h expresses unit lengths in height, and s refers to an area of squares. 3h means h multiplied by three, not thirty-something, and 3(h - 1) means that one is subtracted from h before the multiplication by three occurs. Working with variables requires acceptance of lack of closure, that is thinking with an object (h in this case) without specifically knowing what it is. For example, knowing that 3(h – 1) = 3h – 3 is true, irrespective of whatever the value of h, is itself a generalisation. The equals sign represents a statement of ‘transitive balance’ meaning that the balance is conserved if equivalent operations are performed on both sides of the equation. Knowledge of which operations conserve equality and those which disrupt it are important generalisations about the properties of numbers under those operations, e.g. distributive property of multiplication.

This unit specifically deals with relations that are linear. The first sign of linearity is that there is constant difference in the increase or decrease of one variable, as the value of the other increases by one. In the table above the number of squares increases by three as height increases by one. 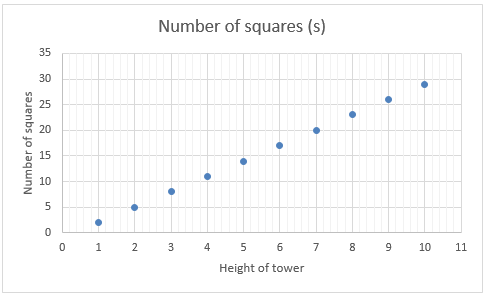 Note that this graph shows a relation, not a function, since the values of variables are discrete, not continuous. There are some important connections between features of the algebraic equation, the table and the graph of a linear relation. Constant difference is represented by the co-efficient of the independent variable (s = 3h -1 in this case), differences of three in the bottom values of the table, and a slope of three (change in s for every unit change in h). The constant in the equation (- 1) is reflected in the table by a need to adjust the value of 3h by subtracting one to get the value of s, and reflected in the graph as a downward translation (shift) of the graph for s = 3h by one unit. This results in the intercept of the graph with the s axis being (0, -1), not the origin (0, 0).

Simple linear equations occur when the value of one variable in a relation or function is set and the other must be found. For example, with the tower problem this problem might be posed; “A tower in the pattern has 98 squares. How high is the tower?” Depending on the equation used to represent the relation, this problem can be expressed as 3h – 1 = 98, 3(h – 1) + 2 = 98 or 2h + (h – 1) = 98. Linear equations with the variable on both sides occur when two conditions are equalised. An example might be, “Both Lilly and Todd look at the same tower. Lilly notices that the number of squares in the tower is three times the height less one. Todd notices that the number of squares is two times the height plus 18. How tall is the tower?” This problem can be written as 3h – 1 = 2h + 18.

The contexts for this unit include Moa, working for money, ropes for gymnastics, swimming, stacking supermarket trolleys, and video games. Those contexts will appeal to most students. Use other contexts relevant to your students, in which there is a constant difference between consecutive terms (linear relationships). For example, the coach takes his car that holds three extra players. All the other players must travel on vans, seven players to a van.

Session One: Maia the Moa

In this session students are shown a spatial growth pattern for a moa made from square tiles. As Maia the moa ages she grows in her legs, body and neck while her feet and head remain constant. Session One is driven using PowerPoint One. The approach is to structure one example of the pattern then transfer that structure to other members of the pattern.

This session builds on the Maia, the moa, pattern to represent the relation between age and number of squares using a table, a graph and an equation. Features of these representations are connected through looking at the effect of changing the original spatial pattern with focussed variation.

In this session students investigate linear equations where the variable is present on both sides.

This session is intended as an opportunity for students to practice applying their understanding of linear relations and their techniques for solving linear equations.

Provide the students with copies of Copymaster 2 and encourage them to solve the problems in co-operative groups.

This week we are learning about linear relationships. Real life is full of situations where things grow at a constant rate, such as the money we earn for the hours we work, or the total cost related to the quantity we buy.