In this unit students plan and carry out their own statistical investigation to find out what makes a paper plane fly the longest. Like all such investigations it is important to have a good idea of what data should be collected, how much data is needed and what the limitations of the collecting mechanism are. It is also important that students are clear about which variable they will be changing so that all other variables can be kept constant. Key vocabulary will need introduction and discussion.

This unit provides an opportunity to focus on decimal notation and to convert between units of measure. In their investigations students will need to measure accurately.

A variable records characteristics of individuals or things. There are two types of variables - categorical and numerical.

Categorical variables classify individuals or objects into categories.  For example, the method of travel to school; colour of eyes.

A scatterplot is a display for paired numerical variables. For example, a sample of students from CensusAtSchool was taken and their heights and arm spans graphed. 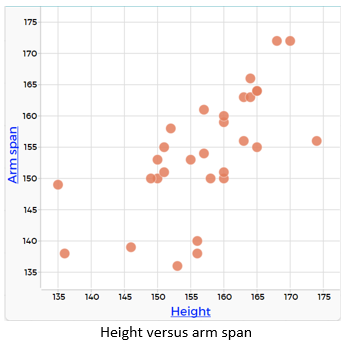 The learning opportunities in this unit can be differentiated by providing or removing support to students and by varying the task requirements. Ways to support students include:

The context for this unit can be adapted to suit the interests and experiences of your students. For example:

Over the next few days have students work in pairs or small groups to carry out investigations using the following steps. Students may want to research the flight of paper planes before they chose the focus of their investigations.

As investigations are carried out the following points may need to be discussed with the students.

This week at school we are making paper planes and measuring how far they can fly. Ask your child to share their design with you and offer some suggestions of things they could try to improve the design of their plane.  If you have access to the internet or other references available, please help your child spend some time researching flight at home so that everyone can report their findings back to the class.