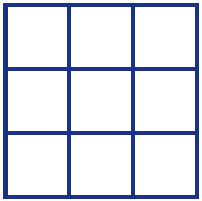 She decides to make all of the magic squares that she can just using the numbers 1, 2 and 3.

How many can she make?

It takes her quite a while because she doesn't know that the sum of a magic square is always three times the number in the centre.

Specific Learning Outcomes
Recall addition facts
Know the idea of, and be able to construct, magic squares.
Description of Mathematics

A magic square is an arrangement like the one below where the vertical, horizontal and diagonal lines of numbers all add up to the same value. This ‘same value’ is called the sum of the magic square.

Magic squares are interesting objects in both mathematics proper and in recreational mathematics. It is likely that students have already encountered magic squares. The problems in this sequence give students the opportunity to use known numerical or algebraic concepts.

It’s a critical part of this and some later problems that three times the centre square is equal to the sum of the magic square.
This is proven in the Extension to the Level 4 lesson Negative Magic Squares in this sequence and in the Level 5 lesson (The Magic Square).

This problem is the second in a sequence of problems on magic squares. The first of these is A Square of Circles (and is also at Level 2), and no attempt is made to explore magic square properties here.

Tui has just discovered magic squares. She decides to make all of the magic squares that she can just using the numbers 1, 2 and 3. How many can she make?

It takes her quite a while because she doesn't know that the sum of a magic square is always three times the number in the centre.

How many magic squares would Tui have made if she had only the numbers 7, 8 and 9 to use?

Note: This problem can be done with any three consecutive numbers. You will only get the four answers.

You might like the students to try other three numbers to see how many magic squares that they can find. You could find more or you may find less.

Students are unlikely to solve the problem the way shown below.  Students are more likely to use guess and check and to stumble across the final set of solutions. However, a systematic approach is shown here to show that Tui should have found only 4 magic squares.

You may however want to have your students see that there is a systematic way of getting the four answers.

centre square = 1: This means that the sum of the magic square has to be 3. This sum can only be made by using three 1s. So this magic square consists of all 1s. Call this square A.

Now suppose that the centre square (2) is used with 1 and 3 somewhere to get the sum of 6. Because of the symmetry of the square, we can assume without loss of generality that this is either done on the main diagonal or on the vertical column through the centre.

In the first case, the middle square in the top row is either a 2 or a 3. (It can’t be 1 because then the row sum would not be 6.) We follow through these two situations.

Now we have to worry about the 1, 2, 3 being in the centre row. Because of the symmetry of the square, we can assume that there is a 2 in the top left-hand square and a 3 in the top right-hand square. This forces the two 1s as shown and then the final 3 falls into place. A final check shows that this is a magic square.

centre square = 3: This means that the sum of the magic square has to be 9. This can only be done if the three numbers that make up a row or a column are all 3s. So we get another uninteresting magic square that we will call D.

Tui should have found four magic squares. These are the ones we have called A, B, C and D.

Solution to the Extension

Tui would have found only four magic squares this time too. Using exactly the same method as before she would have come up with the following answers.