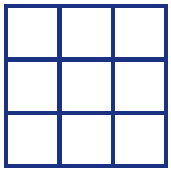 Tui realises that there are nine positions in a magic square.

A magic square is an arrangement like the one below where the vertical, horizontal and diagonal lines of numbers all add up to the same value. This ‘same value’ is called the sum of the magic square.

It’s a critical part of this problem that three times the centre square is equal to the sum of the magic square. Developing the proof is the point of this lesson. This is also proved in the Extension to Negative Magic Squares, Level 4.

The magic square in this problem can be solved by guess and check. Using algebra is however the more efficient way. Students should be encouraged to determine what critical information within the problem is needed in order to find a solution, allowing the students to develop their own algebraic equations to fit the problem situation.

What other magic squares can you make with nine consecutive numbers?

Students may like to investigate consecutive numbers b – 1, b and b + 1 to show that there are only four magic squares that use only these three numbers.
Does the same argument hold with 2b – 2, 2b and 2b + 2? What about b, c and 2c - b?

Suppose that the magic square is as in the diagram below.

Let s = the sum of three numbers in a row. Therefore:

We can see from the eight equations using the numbers 1 to 9, that 5 is the only number which appears in four equations, thus 5 must be the centre square, E:

We can also see that 9, 7, 3, and 1 only appear twice each in these eight equations, thus they must be B, D, F, and H. We can also see that 9 and 1 have to be in an equation together, as do 7 and 3. Therefore, they are restricted to the following arrangements (and their rotations about the centre square):

This is the same arrangement, reflected through B, E and H. Thus, 15 is the only sum, and this sum can only be attained using the above eight equations of three numbers using the numbers 1 to 9. Due to the symmetry of a 3 by 3 grid, reflecting or rotating the solution can form 8 different arrangements of this solution:

We have therefore proved that there is only one magic square that can be made from the numbers 1 to 9 inclusive (subject to rotations and reflections of the square).

Add all of these up and you’ll get