This unit develops students’ understanding of, and proficiency in, counting one-to-one.

Gelman and Gallistel (1978) provided five principles that young students need to generalise when learning to count. These principles are:

The contexts for activities can be adapted to suit the interests and experiences of your students. For example, use Māori counting numbers.

Students need to simultaneously develop proficiency with number sequences forward and backwards by one, and their capacity to apply those sequences to counting tasks. Ideally students’ ability to say word sequences develops either ahead of, or synchronous to, their need to apply it. So students who can count collections up to ten should be learning number sequences beyond ten.

Count by ones on a hundreds board, both forwards and backwards, and ask questions which help students connect numerals to spoken words. For example,
Can you find the number 8 without counting up or down?
What number comes after eight?
What number comes before eight?

Have students work in pairs. They take turns drawing a numeral card out of a container, then work together to find the number on a hundreds board and make a set which contains the number they have drawn, for example a set of eight counters.

First work with numbers 1–10, and extend the range as needed to increase the challenge.

Count by ones on a Slavonic abacus, both forwards and backwards. While you count, say the numbers out loud with students as you move the beads. This supports them to connect the spoken word and the quantity.
Can you find the bead for number 7?
What number comes after seven?
What number comes before seven?
Note that when practising the backward number sequence it is the amount that remains, not the bead removed, that is counted. Zero is an important number to say at the end, as the expression of the absence of quantity (no beads).

Variations
Have students work in pairs. They take turns to draw a numeral card out of a container, and challenge their partner to find the number on the Slavonic abacus. If needed, they can count the beads together to check that the right bead has been identified.

First work with numbers 1–10, and extend the range as needed to increase the challenge.

Session 3: Frogs in a bucket

If needed, link explicitly to the number sequence by referring to a hundreds board.

Extend the problems to two more/less, three more/less and beyond as students’ understanding and control of sequences grows.

Have students work in pairs, with one student putting objects into a container, and the other student listening and counting how many.

Variations
Students may begin to say the number is invariant because it has been the last few times, without necessarily accepting that number is conserved. Introduce the one more/one less principle with this activity. Vary the number of new objects by one while still retaining the original layout and see if the students detect the change and trust invariance enough to build on it.

Make the variations more significant such as adding or subtracting more than one and changing some parts of the arrangement.

Have the students work on the activity Odd one out in pairs, using Copymaster One.

Session 5: Is there the same number?

Vary the spatial arrangement of sets. Begin with a set of objects with some similar characteristics so that students can easily recall the objects that are present. For example, Take a photograph in your mind of the collection. Close your eyes and tell me what you see. Encourage students to pay attention to structure and the organisation of the set, with responses such as “There were two of each animal”, “The animals were on a hexagon”, and “Two on the top, two in the middle, two on the bottom.”

Now I’m going to change something. Vary the spatial layout of the objects, particularly expanding or contracting the length or area of the collection, or rearranging the layout.

Now open your eyes. Are there are still the same number of objects? How do you know?

Make minor variations to the total number as well as the spatial layout so that students are required to trust the invariance of the count and build with it or take from it.

Have students work on the activity Domino Count in pairs. This task encourages students to trust the count in the face of different spatial arrangements.

Working with at least one set of dominoes, students sort the dominoes into groups that have the same number of dots, in total. Each group can be labelled with a numeral card, or students could make their own labels. For example:

Once the dominoes have all been grouped, students can arrange the dominoes in a pattern and write the number fact for each domino. For example, 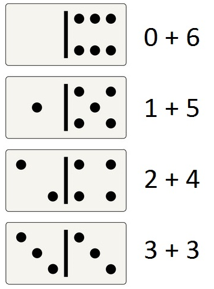 The abstraction principle involves the idea that non-tangible items such as sounds, touches, and ideas can be counted. Developing students’ capacity to count items they cannot see and feel is important because it helps them to realise that numbers are ideas.

Students play pattern match in groups of three or four. Each group needs a set of pattern cards (Copymaster Two) and a set of digit cards.

After the game, talk with students about how they recognised some patterns instantly. Look for students to use combinations of smaller groupings, e.g. “I know it’s seven because four and three are seven.”