This unit applies students’ strengths in equal sharing to develop their fractions concepts.

NA1-1: Use a range of counting, grouping, and equal-sharing strategies with whole numbers and fractions.
AO elaboration and other teaching resources
GM1-1: Order and compare objects or events by length, area, volume and capacity, weight (mass), turn (angle), temperature, and time by direct comparison and/or counting whole numbers of units.
AO elaboration and other teaching resources
Specific Learning Outcomes
Description of Mathematics

Usually fractions are introduced by partitioning a single whole into equal parts. While this approach has some merit it is now accepted in research circles that it restricts opportunities for students to integrate their whole number and fraction knowledge. The need for extension of the whole numbers system to include parts of wholes (fractions) arises in two types of situation, measurement and sharing, which involve division.

This unit focuses on the sharing view of division, called partitive division. In this view a number of objects are equally shared among a number of parties. So 12 ÷ 4 = ? can be thought of as a question, “If 12 objects are shared equally among four people, how many objects does each person get?” When the sharing is not possible to complete with whole objects, equal parts of objects need to be created by partitioning. For example 15 ÷ 4 = ? can thought of as a question, “What is the share if 15 objects are equally shared among 4 people?” The answer is 3¾ objects. The advantages of using a partitive division approach are that whole numbers and fractions must be dealt with simultaneously, students create the parts that form the fractions, and the one (whole) is never lost. Equi-partitioning and iterating (copying) of a unit are critical understandings in the measurement process. This unit uses length as the attribute of choice, as opposed to regions like squares or circles, or other more complex attributes like mass, capacity or time. As length is the simplest attribute it allows students to attend to the equi-partitioning required and links to conceptual tools like the number line.

The activities in this unit can be adapted to make them more interesting by adding contexts that are familiar to them. While the kiwi and worms context works well since the worms can be easily divided into fractions, you could easily change it to children and chocolate bars or rabbits and carrots, or encourage your students to come up with their own ideas.

You may like to make the play dough for this unit with your class.

This is the Plunket recipe for play dough. It lasts a long time if stored in an airtight container. Make sure you watch very young ones playing with this, as you don't want them to eat it due to the high salt content.

Directions:
Mix flour, with salt and cream tartar in a bowl.
Add boiling water and oil plus a couple drops of food colouring.
Mix quickly then knead on a floured board until firm.
Add extra flour if sticky.
Store in an airtight container.

The point of this session is to establish the single worm as a unit of measurement for length. Prepare a few play dough worms that are 12 centimetres long before the session.

The focus of this session is on equal sharing. The problems have whole number answers so fractions are not needed unless students create more complex situations. Observe for the strategies students use. These strategies might be:

The focus of this lesson is to create fraction shares where whole numbers of worms are inadequate to complete the sharing equally. If there are problems created by students from the previous day that have remainders you may like to use those problems rather than those on Copymaster 2.

The purpose of this session is for students to use inverse thinking. So the lesson explores variation to what conditions can be given or be missing from a sharing scenario. Students are given the share for each kiwi and asked to recreate the total number of kiwi and the number of worms that were shared.

This week we are studying fractions. The main idea we are exploring is why we need fractions when we are sharing out objects among people.

The stories we will be using are about kiwi sharing worms. For example, here is a problem we will solve: 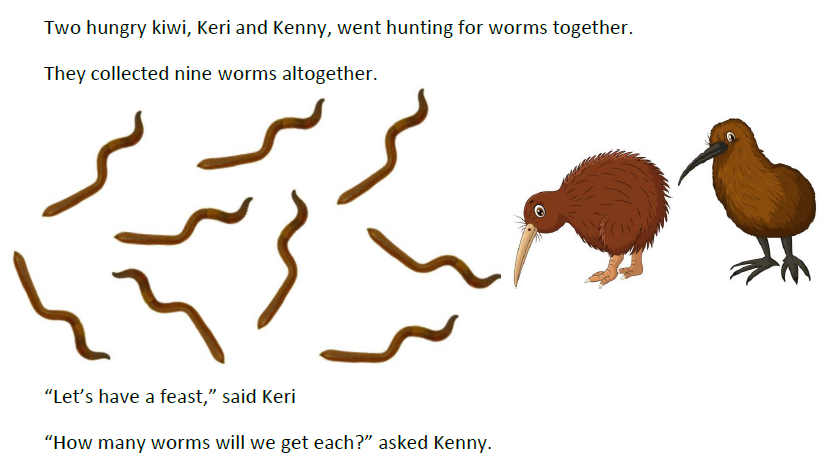 Please support your child in their attempts to solve the problems.