In this unit students will explore the importance of triangles, particularly right angled triangles, in the real world. Students will use practical measuring skills and calculations to find a pattern linking the ratio of the sides of a triangle with the angles. Introducing trigonometry using scale diagrams improves understanding of the concepts.

Trigonometry can be traced as far back as ancient Egypt, and possibly Babylonia. The name comes from the Greek words for triangle (trigonon – three angles) and measure (metron). Hellenist mathematicians, around 500-300 BC, applied trigonometry to the location of stars and other celestial objects.

Therefore, the origins of trigonometry lay in practical measurement tasks of finding unknown sides and angles, using right angled triangles. Medieval Persian mathematicians developed trigonometry as a separate field of mathematics, and much later, in the late 1500’s, the trigonometric (or circular) functions were developed. Many real-life situations are modelled by trigonometric functions, such as sea levels as the tide changes, and day length as seasons change.

Trigonometry relies on the conservation of ratios between corresponding sides of similar right-angled triangles. Consider the case of two similar right-angled triangles. (3, 4, 5) and (6, 8, 10) are Pythagorean triples since 32 + 42 = 52 and 62 + 82 = 102. Therefore, the triangles are right-angled. The matching angles of both triangles are also equal (for example, the two angles marked). Less obvious is the proportional relationship between matching side lengths. The ratios 3/6, 4/8, and 5/10 are all 1/2.

The trigonometric ratios sine, cosine and tangent are the invariant side ratios for any right-angled triangle with the same angle they refer to.

Let’s imagine the (3, 4, 5) triangle enlarged by a factor of 0.2 or . That means that each side of the new triangle is one-fifth the original.

The unit triangle is useful for two reasons:

This unit may take longer than one week. Introducing trigonometry through scale diagrams mimics historical development which may help students to appreciate the sophistication of using trigonometric ratios to find unknown lengths and angles.

The ideas in this unit are explored further in the complementary unit Using trigonometry.

In this session the importance of right-angled triangles is discussed. Begin with the scenario in PowerPoint One. Ancient Egypt was one of earliest sites for trigonometry though the main story is about Thales, often regarded as the father of Greek mathematics.

Slide two introduces the problem of finding the steepness of the great pyramid. You may want to have a model of a pyramid to show how the steepness for slant height is steeper than slope along an edge. If you make a pyramid from modelling clay you can cut it vertically along a diagonal of the square base to illustrate.

You may need to discuss the measure “royal cubit” which was the length from the Pharaoh’s elbow to his longest finger (40 – 45 cm). Ask students to use a ruler and protractor to make a scale drawing of both profiles. They should get a reasonable estimate of the angles, 51.84° for the slant height angles and 41.99° for the edge angle. These are the measures of the original pyramid which are different today due to erosion.

Show further slides of PowerPoint One to share the story of Thales’ attempt to measure the height of the great pyramid using its shadow. It is likely that Thales used a 45°, 45°, 90° triangle so the shadow was the same length as the height of pole and pyramid respectively. The story is richer if he used a non-isosceles triangle as depicted in PowerPoint One. 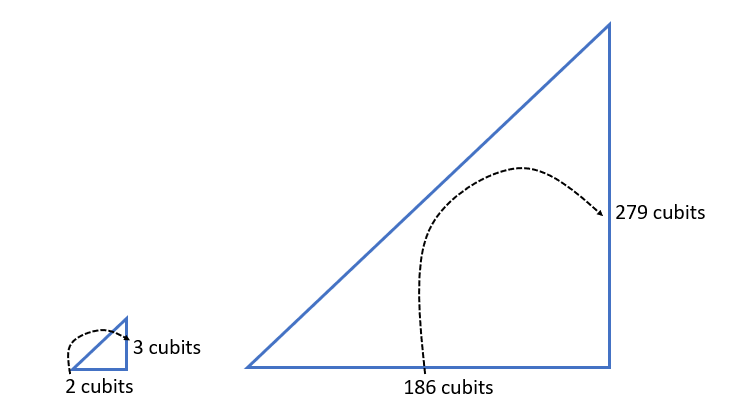 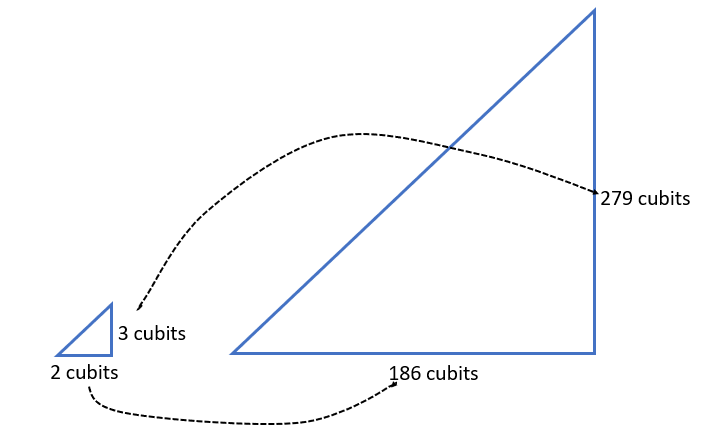 Give students Copymaster One which includes four pairs of similar right-angled triangles. Their task is as follows:

After students complete the exercise discuss what is always the same about similar right-angled triangles. Look for students to summarise the same angles and same side ratios.

Last lesson we learned about Thales. Today we explore a contribution from Hipparchus, another ancient Greek, who lived over 300 years later than Thales. His great mathematical invention was the unit circle.

Hipparchus created tables of triangle values like this (see PowerPoint Two: Slide One).

You may wish to carry out a practical task of creating values for the opposite and adjacent sides using a metre-long hypotenuse. Hipparchus may well have engaged in a similar task to calculate his tables, albeit with more precision.

Students will need a copy of Copymaster Two (enlarged to A3 if possible), chalk and a metre ruler. Ask your students to accurately draw right angled triangles with a hypotenuse of exactly a metre. Have them find the length of opposite and adjacent sides of a unit triangle for the angles, 30° (as per Slide One), 45°, 60°, and 75°. If they use millimetres as the degree of precision, they can find the values to 3 decimal places. Tell them to create a table like this:

Students might notice that the values are ‘swapped’ for 30 and 60 degrees. They might also see that the adjacent side values decrease as angle increases while the opposite side values increase.

Finish the session with the two problems on Slides Three and Four of PowerPoint Two. Slide three involves generating cosine and sine values for 65°.

Do students recognise that on Slide Four the adjacent and opposite sides are equal since the right-angled triangle is isosceles?

Session Three explores the nine basic problem types that can be solved using cosine, sine and tangent ratios. The important question is:

How many measurements of a right-angled triangle are needed to draw the triangle? 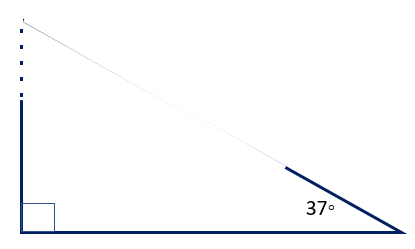 Some students may recognise that the angles are now set at 90°, 37°, and 63° as the sum of internal angles must equal 180°. However, without a side length the scale of the triangle is unknown.

Next 8cm is rolled. Students might draw three different figures.

You might discuss why two measurements are not enough to create an exact triangle but could be if the location of the side in relation to the angle of 30° is known (opposite, adjacent or hypotenuse). Discuss what might be rolled next and whether that measurement would ‘fix’ the triangle. Possibilities might be 63° (already known), 45° and 37° (impossible as sum of angles will not be 180°), 6cm (works only if 6cm is opposite the 30° angle, and 8cm is adjacent to 30°), 8cm (impossible as the triangle would need to be isosceles with angles of 90°, 45°, 45°), 10cm (works only if 8cm is adjacent to 30° and 10cm is the hypotenuse).

Try three examples of trying to draw triangles progressively from measurement information. The important generalisations are that it is possible to draw an exact triangle if:

Knowing all three angles gives similar triangles but the size is unclear.

PowerPoint Three, Slides 1-6, are about choosing the correct ratio, sine or cosine, to solve problems where one measure in a trigonometric ratio is missing and must be found from the information given. For each slide ask:

At this point students have not encountered tangent. Recap on what measures are given for sine and cosine to be relevant to solve a problem. 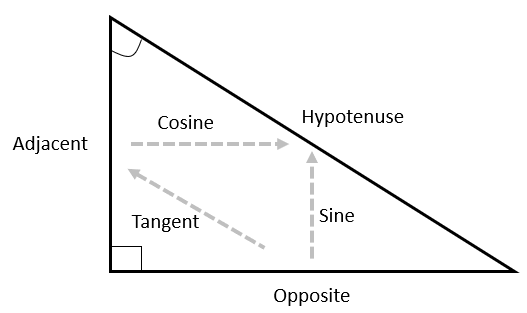 Students might notice that they do not know a ratio for the relationship between opposite and adjacent sides. Tell your students that tangent is the name for the ratio of opposite divided by adjacent. You might introduce the mnemonic SOH-CAH-TOA as a helpful way to remember the three basic trigonometric ratios. Proceed to Slides 7-9 of PowerPoint Three so student see how the tangent ratio can be applied.

Students may need more practice with identifying the ratio required for a given situation and writing the equation to be solved.

Watch for these issues as your students work on the examples in PowerPoint Four. Pause the video where you please to allow for students to work on sub-tasks and to have discussion.

After going through the PowerPoint challenge your students to may up a similar problem for a partner to solve. Ask them to provide a full solution with all steps. Choose some examples to share with the class and put the others into a book of trigonometry problems.

For more algebra practice ask your students to work on the four learning objects in the Visual Linear Algebra suite. (https://nzmaths.co.nz/content/visual-linear-algebra) Familiarity with solving linear equations is important for other aspects of the Level 5 curriculum, such as reasoning with rates and ratios, finding areas and perimeters, and conversions in measurement, and interpreting scatterplots in statistics.