This unit supports students to understand angles as a turn relationship between two rays, and to apply their understanding in sport and design settings.

In this unit the students will discover how to measure angles. All measurement is the assigning of quantity to an attribute (a feature or characteristic). An angle is created by rotation or turn. Most angles, that students encounter, are presented in static form. For example, angles in a room, or in household furniture, are already constructed. An angle in those situations is the intersection of two or more planes (flat surfaces). Two dimensional diagrams of angles are also presented in static form, illustrating that two rays intersect at a common point. 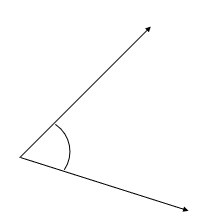 However, it the relationship between the connecting rays that constitutes the angle, and that relationship is the turning of one ray onto to other about the point where they meet.

We owe our system of measuring angles to the ancient Babylonian civilisations (c. 3000-539 BC). The Babylonian number system was based on 60, and the measure of 360° as a full turn was based on a calendar of 360 days. Therefore, the creation of a measure of angle was a result of wanting to quantify the dynamic passage of time. 360 is a good base as it is easily partitioned into many fractions, e.g. ¼ of 360° equals 90°.

Activities in this unit can be differentiated to cater for the current achievement levels and learning preferences of your students. The difficulty of tasks can altered in many ways, including:

Adapt the contexts for working with angles if needed, to meet the needs and interests of your students. Sport is a motivating context for many students, and logos are a familiar context. However, students might be more motivated by the context of physical journeys, such as hiking or yachting, especially in America’s Cup time. Angles in culturally significant buildings or maps of the local area might be used. Navigation systems used by Polynesian mariners is likely to inspire some students.

In this exploration students attend to situations where angles are present. In going so, they recognise that these situations can be dynamic, e.g.an ice skater turning, or static, e.g. a playground slide.

In this lesson students play two games related to angles, snooker and golf. Look up short videos of both sports online, and briefly discuss how angles are involved in each game.

In this final lesson students apply their knowledge of angles to create a logo with rotational symmetry.

This week we have been exploring angles. We found that an angle is a turn relationship between two rays. Then we investigated the best place for a goal kicker to shoot from, played games of pool and golf, and created our own logo. Ask us to tell you all about how angles are involved in these activities.