At level 3 students are developing their ability to accurately describe the effects of transformations, using for example, mirror lines for reflection, and centres and scale factors for enlargement.

Enlargement is a transformation that changes the size of objects. Enlargements are specified by the position of the centre of enlargement and the scale factor. For example, a scale factor of two will result in an object which is twice the size of the original. Scale factors of less than one result in figures that are smaller than the original.  While these are not frequently used at this level, negative scale factors result in an object ‘reflected’ on the other side of the side of the centre of enlargement.

Under enlargement the original object and the enlarged object are said to be similar. That is, all their corresponding angles are congruent, and the lengths of their corresponding sides are proportionally related.   In comparison, two objects are described as congruent if they are the same size and shape.

Rotations can be specified by the angle of rotation and the location of the centre of rotation.

Translations can be described in terms of the direction and distance moved (for example a translation of 3.2cm at a 45 degree angle), or as movement along the x and y axis. 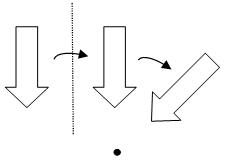 This key idea develops from the key idea of transformation at level 2 that some objects have symmetry and do not change position or appearance under some transformations.

This key idea is extended to the key idea of transformation at level 4 that some properties of objects do not change under different transformations.