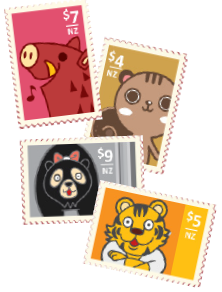 The Otehaihai Post shop has two denominations of stamps for big parcels.
It can make up any amount of postage from $54 onwards.

What are the values of the denominations?

It is helpful if students have worked on the problem What is s?, Algebra, Level 6, before attempting this problem.

In this problem, students are given the amounts that can and can't be made with two denominations of postage, and are asked to find the value of those denominations. This is an example of an inverse problem. As these occur often, it is a useful skill to be able to solve problems from all angles.

Guided guessing and checking is one approach that students may use, however the Extension problem also involves the constructing of proofs. Students are likely to need support here as this construction may prove challenging.  However, this is an important aspect of this problem, as it will develop mathematical skills of conjecturing (guessing), proving and using algebra. There is more than one solution to this problem.

The Otehaihai Post shop has two denominations of stamps for big parcels. It can make up any amount of postage from $54 onwards. It can’t make up $53. What are the values of the denominations?

Write a problem of your own like the one above using values other than 54 and 53.

Is it possible to make up a problem where 54 is replaced by an odd number?

The method of proof here is essentially that of What is s?, Algebra, Level 6.

This can be done by guessing and checking. It should produce four answers (see below).

It is worth noting that (s – 1)(t – 1) can never be odd. This could only happen if s – 1 and t – 1 were both odd. That would mean that s and t were both even. But then they would have a common factor of 2. However, a linear combination of even numbers can never be odd. So it would not be possible to get all values of postage from some point on.