This unit supports students developing an understanding of three-digit numbers and how to operate with them.

Understanding place value is crucial if students are to develop the estimation and calculation skills necessary to become numerate adults. Our number system is very sophisticated though it may not look it. While numbers are all around us in the environment the meaning of digits in those numbers and the quantities they represent are challenging to understand. Our number system is based on groupings of ten. Ten ones form one ten, ten tens form one hundred, ten hundreds form one thousand. And so the system continues to represent very large numbers. The place values, one, ten, one hundred, one thousand, etc., are powers of ten.

To represent all the numbers we could ever want we use just ten digits, 0, 1, 2, 3, 4, 5, 6, 7, 8, and 9. The word for digits also comes from our fingers. We don’t need a new number to represent ten because we think of it as one hand, one group of ten. Similarly when we add one to 99 we write 100 and do not need a separate symbol for one hundred. The position of the 1 in 100 tells us about the value it represents. Zero has two uses in the number system, as the number for ‘none of something’, e.g. 6 + 0 = 6, and as a place holder, e.g. 704. Place holder means it occupies a place or places so the reader knows the values represented by of the other digits. In 500 zero is acting as a place holder in the tens and ones places.

Renaming a number flexibly is important. In particular it is vital that students understand that when ten ones are created they form a unit of ten, and when ten tens are created they form a set of one hundred. For example, the answer to 210 + 390 is 6 hundreds since one ten and nine tens combine to form another hundred. Similarly when a unit of one hundred is ‘decomposed’ into tens the number looks different but still represents the same quantity. For example, 420 can be viewed as 4 hundreds and 2 tens, or 3 hundreds and 12 tens, or 2 hundreds and 22 tens, etc. Decomposing is used in subtraction problems such as 720 – 480 = □ where it is helpful to view 720 as 6 hundreds and 12 tens.

Place value was devised to count large numbers of objects and represent the set of objects using a succinct set of numerals. It is appropriate that students learn to use place value as a means to estimate the number of objects in a set and count the number exactly.

Sessions One and Two

In these session students explore counting sequences, particularly with tens and ones. They come to understand why numbers can change considerably with the addition of one or ten, especially when ten units of a particular place are made and those ten units form a unit of the next highest place value. For example, if ten is added to 393 the nine tens become ten tens and are renamed to form another hundred. So, 393 + 10 = 403. Zero plays a critical role as the numeral for ‘nothing of something’ and as a place holder in numbers like 403.

Understanding the patterns of change in digits as numbers are renamed is important for mental calculation. For example, if tens are added to 403 to pattern of sums is 413, 423, 433,.. Only the tens digit changes until 493 is reached. Students need to recognise situations when adding one unit of a given place value changes only the digit in that place, and when renaming will occur and two or more digits will change, e.g. 493 + 10 = 503.

Number sense requires students to have an understanding of the quantities that numbers represent. In these sessions student organise materials to represent three digit numbers. Non-proportional representations of place value like money and the traditional abacus can give students an impression that the digits in the tens and hundreds places are just units of one. Since the place values are powers of ten, the quantities represented by the place values scale rapidly. One hundred is ten times more than ten, etc.  Models for place value where ones are visible is essential for students to appreciate the true value of digits in numbers.

In these sessions student create a physical model for three digit numbers and use place value units as a powerful way to estimate and count the number of people in a crowd. In doing so they appreciate the elegant power of grouping ten ones as a unit of ten, and ten tens as a unit of one hundred.

Use Copymaster One to make a laminated version of Place Value People. Create units of one hundred, tens and numbers one. You need around 20 of each unit.

Use Copymaster Four to make an A3 sized version of The Thousands Book. This could be in colour, laminated and secured with a book ring through the top left corner of each page.

In this session students investigate the place values of three digit whole numbers. They relate the numerals to the quantities they represent using photocopied sheets of Place Value People (see Copymaster One).

Use the Place Value People material and a place value mat (drawn on a piece of A3 paper) to model a range of different three digit numbers. For each number, ask your students to write the numeral for the number of people and to practise with a partner how to say the words for that number. Model counting on in ones and tens until that place is full and then replace the tens ones with a ten (or ten tens with a hundred). Write down the new number and read it out as you add each unit.

Some key ideas to discuss are:

Copymaster Two can be used to provide challenges for students with 3 digit numbers. All of the challenges involve combining place value units to form the next largest unit to the left.

Alternatively students might work in pairs to set challenges for each other with a calculator, photocopied Place Value People materials, and scissors. For example:

It is important that your students move beyond manipulation of the Place Value People materials to anticipation of the result. Discuss how they might know the answers to these problems without having to work with the materials (see Copymaster Three). You might check their predictions with a calculator.

In this session the students consolidate the connection between the place value of two digit numbers and the quantities that the numbers represent.

The ‘Close to 1000 Game’ is a variation on ‘Close to 100’ which was introduced in “Place Value Tens and One”, the first unit in this Place Value series. Play the game in threes to create interesting dynamics.

Each trio will need one dice (1-6), photocopied Place Value People they can cut up if need be, and a calculator. They will need to keep track of their score using Copymaster Six.

Each player can only have twelve rolls of the dice. So if the twelve spaces of their scoresheet are full from numbers given by other players they must give the next numbers they roll to other players. Note that there are four spaces for ones, five spaces for tens and only three spaces for hundreds on the scoresheet.

At the end of ten rolls for each player the person with the total closest to 1000 wins. So a score of 1236 beats a score of 698 because it is 236 away for 1000 while 698 is 302 less than 1000. People materials can be used to build up the totals physically if needed and the calculator used to check mental calculations by the students.

Close to 1000 gives the students the opportunity to combine hundreds, tens and ones. Ideally the students calculate mentally rather than rely on People Materials or a calculator. Discuss how they might add up players’ totals. Here are a couple of examples: 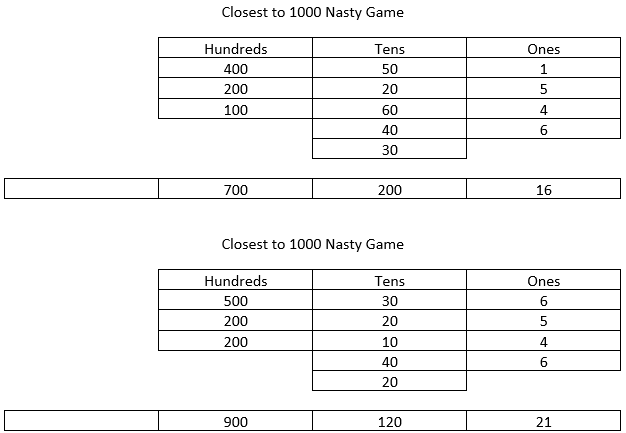 Who has won the game?
The winner is decided by difference from 1000. What does difference mean?
How can the difference be worked out?

In this session students use the People Materials to show interesting 3 digit whole numbers. In doing so they gain a sense of the quantity that the numbers represent. They also begin to use place value to find the difference between quantities represented by three digit numbers.

Show the students the interesting facts chart (See PowerPoint One). Ask the students to work in pairs to make the number of people shown on each slide using photocopied people sheets. Choose slides that you think will appeal to your students and make three of four of the numbers. You may need to check on the location of The Chatham Islands and Kawerau Gorge. Make sure the students make a place value chart of each number by lightly glue sticking the cut out people units to an A3 page.

Discuss ideas about the numbers, such as:

We will also rename the three digit numbers in flexible ways so that we can apply renaming to the operations, particularly addition and subtraction.