Getting partial: Fractions of sets

This unit develops the concept of a fraction as an operator, or multiplier, acting on an amount, e.g. two-thirds of 24. Using fraction multipliers to represent the relationship between different amounts is also explored.

NA4-1: Use a range of multiplicative strategies when operating on whole numbers.
AO elaboration and other teaching resources
NA4-3: Find fractions, decimals, and percentages of amounts expressed as whole numbers, simple fractions, and decimals.
AO elaboration and other teaching resources
Specific Learning Outcomes
Description of Mathematics

Fractions are an extension of whole numbers and integers. Fractions are needed when wholes (ones) are not adequate for a task. Division often requires equal partitioning of ones. Sharing two chocolate bars equally among five people requires that the bars be cut into smaller equal parts. The operation might be recorded as 2÷5=2/5. Note that the number two fifths, is composed of two units of one fifth. In practical terms the equal share can occur by dividing each of the two bars into fifths, then giving each person one fifth from each bar.

Many contexts involve relating the relative size of discrete quantities, that is, quantities that are collections of individual items. According to Watanabe there are two types of relationship, part to whole, and whole to whole.

Fractions can represent the relationship between part of a set and the whole set. In the diagram below one quarter or four eighths of the whole set is grey.

Fractions can represent the relationship between two independent sets or amounts. To complicate matters the sets can be within a whole set, as in a ratio situation.

Set models tend to be more complex than continuous models like lengths, areas, and volumes, though measurement attributes vary in perceptual difficulty. Set models have the added complexity of competing wholes (ones). Suppose that a box has 12 chocolates, and three of them are strawberry flavour. 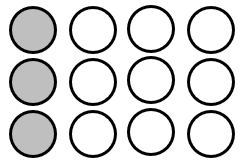 The context for this unit is toppings put of pizza. While most students are familiar with pizza as a common food, other contexts may be more meaningful to your ākonga (students). Activities can be adapted to suit the interests and experiences of your students. For example:

In this lesson students connect circular region models of fractions with finding fractions of a set. By the end of the lesson students should be able to unitise a given set into different parts, and name the part-whole relationships in terms of those parts.

Begin with Powerpoint One that presents the scenario of distributing toppings, like pieces of salami, evenly around a pizza. Students are often familiar with a circular region model so the connection to a discrete model is useful.

Note that the problems are about finding a unit fraction of a set, so the fraction behaves as a multiplier. Therefore, the equation might be written as multiplication or division, e.g. 1/4×36=9 or 36÷4=9. Students who use additive build up to anticipate the result should be encouraged to use multiplicative thinking with questions like:

The final question is about finding a multiplication or division fact that approximates the solution, from which the student can derive the solution. For example, 40 ÷ 5 = 8 can be derived from 10 ÷ 5 = 2 (See Slide Four).

After working through PowerPoint One ask students to work on Copymaster One in pairs. The problems all involve finding a unit fraction of a set, in the same pizza scenario. You might make materials, like counters, available to some students but encourage them to anticipate the result of the equal sharing first. Look for your students to:

Spread all the cards in the middle, face up so all players can see them.

The winner is the person with the most pizza cards when play finishes, or when all pizza cards are gone.

In the following two sessions students extend their knowledge of fractions as multipliers (operators) to non-unit fractions, that is fractions with whole numbers greater than one as the numerator, e.g. 2/3 and 4/5. Then students explore the part-whole relationships in ratios, using fractions to represent relationships.

Begin with PowerPoint Two that shows how to find a non-unit fraction of a set. Progress to Slide 11. Students will notice that the first four slides are the same as PowerPoint One.

Take at least two of the examples from PowerPoint Two and write equations for the situations.

Discuss the meaning of the x symbol as ‘of’ and how the numerator and denominator of the operating fraction impact on the calculation, e.g. 4/5 is found by dividing by five then multiplying by four.

Put the students into groups of four and provide the puzzles made from Copymaster Three. There are five puzzles. Each student gets one card for each puzzle. They must work with their team-mates to find a solution that matches all the clues. Each player must ‘own’ their clue, that is, ensure that they retain it and that the solution matches their clue. Encourage the students to record their strategies in some way on paper.

Look for your students to:

After an appropriate time bring the class back together. Focus on one or two puzzles that brought out interesting strategies. Choose groups to share their solutions. Conclude with slides 12-14 of PowerPoint Three. An important idea is that either order of multiplying by the numerator and dividing by the denominator works. Usually dividing first is more efficient.

Begin with the game “3 in a line.” Gameboards can be printed and laminated using Copymaster Four. The game requires students to practise finding non-unit fractions of whole numbers. An important feature of the game is that equivalent fractions operating on the same whole numbers produce the same product, e.g. 3/4×24=18 and 6/8×24=18.

Let students work on Copymaster Five individually or in small groups. You might use counters or cubes of various colours to represent the toppings. Manipulation of the ‘toppings’ in physical form can help students as long as they are invited to anticipate the results of division before acting. Look for your students to identify the whole, use fractions to represent the part-whole relationship for each topping, and simply the fraction, if possible, using common factors. The second page of problems requires students to organise a complex set of clues to establish a mix of toppings. Trial and error approaches may be common but encourage your students to organise the clues by usefulness. Physical objects can be useful to try swap ‘toppings’ as clues are considered.

The final session of the units develops the use of fractions to describe the relationship between different wholes and between parts in the same whole.
Begin with the starting problem on Powerpoint Four. This task is very rich as it involves ideas about area and comparative price, as well as the comparison of toppings.

If you like pepperoni pizza, what are you better to buy, two small pizzas or one large pizza?

Let your students investigate the problem in small groups. Encourage them to develop an argument about which option is best, and their reason for choosing it. After a suitable time gather the class to discuss their answers. Groups should balance at least two characteristics, from area, price, number of pieces of salami, convenience, amount of crust, etc.

A response like that contradicts:
The small pizza is better because the larger pizza is only one and one half times as big (attending to diameter) but twice the price as the small pizza.
Note that capable students might calculate the areas (Small: π×132= 530.93cm2; Large: π× 19.52= 1194.59cm2) and provoke a discussion about comparative areas.

Encourage different kinds of comparison, such as:
If you just looked at the number of slices of salami, which option should you go for?

Lining up the collections of pizza pieces makes the comparison easier, but student still need to do the following:

Using Copymaster Six students create a puzzle that involves fractional multipliers. The four pizza cards are put at the corners of a square. Then students place the arrow cards between the pizza cards to represent the correct relationships between the numbers of pieces of salami. For example, the multiplier card ×4/3 goes between the six-piece pizza and the eight-piece pizza, since 6×4/3=8. Let the students solve their puzzle in pairs or threes of mixed ability. Challenge students to consider how the multipliers might be expressed as mixed numbers as well, e.g. ×4/3 can also be expressed as ×1 1/3. Note that most of the operators require simplification using common factors, e.g. ×8/6 is simplified to  ×4/3.

As a final challenge students, can used the blank sheets 3 and 4 of Copymaster Six to create their own puzzle for others to solve.

This week we explored fractions of sets. We used a pizza context to see how to solve problems like “two thirds of 24 equals 16.” The unknown was changed around so sometimes we had to find the product (answer) and other times we had to find the multiplier (fraction) and other time the starting number, like 24. We also explored finding fractions in ratios and identifying the fraction multiplier between amounts.