In this unit, students will learn to investigate polygons using an instrument of their own construction. They should be able to find the general formula for the number of degrees in any polygon (including a triangle). Finally they will investigate an interesting locus problem related to polygons.

In the process they should be encouraged to find geometrical results of their own and to justify the truth of these results. They should also be able to find counter-examples if their conjectures are wrong.

The above is at the heart of mathematics. It is important to find things and be able to use them but it is also important to show that what you have found is indeed true for a whole class of objects.

In this session (or in an introductory session) the students make the piece of equipment called a Turn Measurer (TM) and begin to use it for measuring amounts of turn.

Both the circle and the arrow need to be made of clear plastic. The sort of stiff plastic used used in packaging works well. The circle is calibrated with the angles from 0º to 360º in steps of 10º. The arrow needs to be able to rotate about its centre. A flat backed drawing pin (pointing upwards) could be used as the centre pin. The circle should be approximately 6cm in diameter. 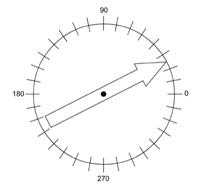 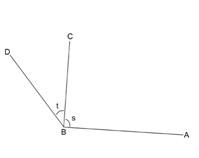 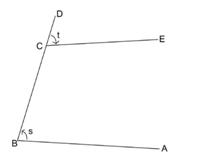 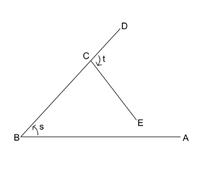 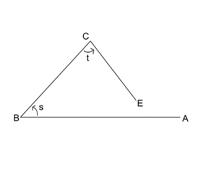 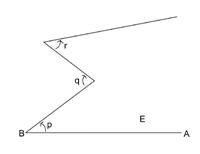 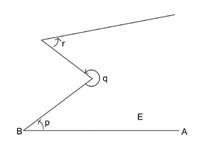 In this session the students’ newly found skill in finding the sum of turns can be put to use to do some valuable mathematics. In particular, we look at the relative sizes of the angles on parallel lines and the sum of the angles of a triangle.

Take any triangle ABC (see above). Draw a line DE that is (i) parallel to AC and (ii) passing through B. Using the arrow it can be seen that the angle DBA must be s, and the angle EBC must be w. Thus, at the point B we have the 3 angles s, v and w which together form a straight angle.

Important: discuss why the second solution would not work if DE was only nearly parallel to AC, but not exactly parallel. (Can a proof be made if the line DE is not parallel to AC? Here the angle DBA will be a little more/less than s and the angle EBC will be the same amount less/more than w. But then it is clear that it is easier to have DE parallel to AC.)

In this session the students will use the arrow to investigate angles in polygons. 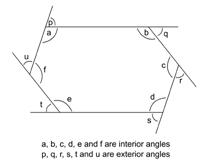 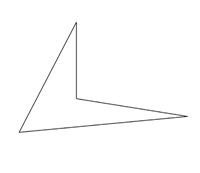 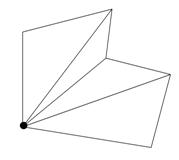 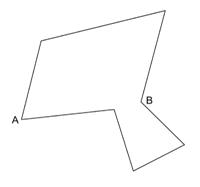 In this session the ideas encountered in the previous sessions are consolidated. 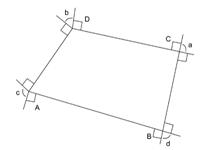 In this session the ideas developed in previous sessions are linked with the idea of a locus.

The whole session is based on an open-ended problem. Students should be encouraged to proceed carefully using the sorts of ideas developed in previous sessions. In particular they should be alert for possible counter-examples. And they should state their results carefully, and justify them. 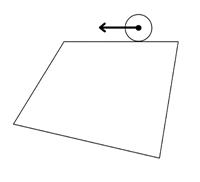 The result for such concave cases is probably beyond the students at this level. However, it is not beyond them to show that the result for convex cases does not hold in these new cases.

There are other situations that the result does not work for, for example, that shown below. 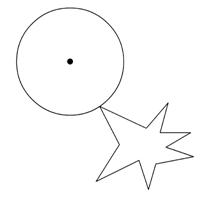 Again, it is enough for the students to realise that these are exceptions to the situation that applies to convex cases.