Our accelerated maths group consisted of six year 2 children (three girls and three boys) who tested between stage 2 and 3 on the NumPA Diagnostic Interview. The group was chosen as they all had been identified by their teacher, from their NumPA results earlier in the year, as not being where they should be mathematically.

My aim was to get the students from CA-AC by the end of the intervention.

The students were released from their home room maths class between 11.00am and 11.50am each day to attend this programme. Three of the students were also on the Reading Recovery programme and could not afford to miss out on other core curriculum areas. These lessons took place five days a week, at the same time each day and in the designated area assigned for this group. The programme was run in the senior resource room. Display room was limited to one back wall space, a whiteboard and a door. Resources had to be borrowed or especially purchased for this group.

Initially I struggled with what I was aiming to do with these children, as this level was not my field of expertise. I currently teach year 5 and 6. My first weeks were about building up a relationship with the children and getting to know their personalities as well as their strengths and weaknesses in mathematics. I discovered that the students had pockets of information but were not confident in number knowledge and in the use of mathematical language.  I therefore tried to focus on these two areas. They could understand what was meant by the 'next' number or by the number 'before', but had trouble equating this to the language of ‘one more, one less’. We had a flip chart to 20, which was used most days to reinforce these concepts.

I tried to mix up the sessions with memory games, practice counting forwards and backwards, number knowledge games and exploration with equipment. The lesson routine was repetitive as I used parts of the set lesson format from the Target Learning Programme designed by Marilyn Holmes Otago University.

I wanted the children to work with equipment and materials before rushing them too quickly into imaging. We did some written recording in books; for instance dictation of numbers to show the students' thinking. We also used whiteboards as I found the children found whiteboard markers easier to manipulate than pencils.

Having numbers to 20 written as words, as numerals, drawn pictorially, and written as expanded numbers ( for example thirteen as 10 + 3), helped the students with written recording. They were an excellent tool for reinforcing their learning. The children were proud of their work and often looked at and commented on the number of the week or the latest display.

I used games when reinforcing knowledge concepts. The games I used came in a folder I received from my maths adviser and the children had not seen them before. This made them appealing. They were colourful and had fun pictures, such as monsters, which appealed to the boys, and ladybirds which appealed to the girls. One of the students said he liked learning the new maths games and one of the girls mentioned that the ladybirds were cool!

Attendance was a contributing factor that made a real difference to  the children’s achievement. One child in particular, whose attendance was irregular and who was not particularly confident from the start, seemed to revert back to the start of his learning after having a week away skiing. On his return, the others appeared that much more confident then he was and they had progressed further in their understandings. This student was often absent from his home room and I believe this factor also contributed to his lack of progress. Consistency and continuity were very important to the rate of student progress. This was also evident in the case of two other students in the group. Even though final data indicated that they had made some progress, they would have greatly benefited from the sessions missed.

Overall I felt the students made good progress and I hope they are able to retain this once they are back in their classrooms.  I have seen one student in particular grow in confidence and blossom over this time. She is still very quiet and shy but much more comfortable in giving answers and sharing ideas in a small group. This particular student may be lost in a classroom situation where she could easily fade into the background. Having a small group to work with and having the time allocated worked well for me. I was able to improve my own content knowledge to help move students on to their next learning steps. 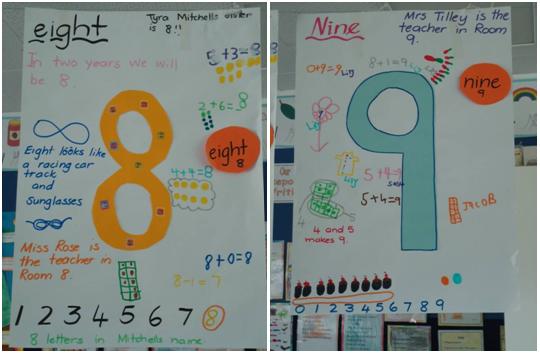 Small groups, a sound understanding of teacher and content knowledge, a repetitive programme, a mathematically rich environment, home/school partnerships, the use of materials, developing mathematical language and relating this to the students' lives, and good attendance are, I believe, essentials for teachers who are trying to help their underachievers to succeed.

“I see numbers in lots of different ways,” said L.

From the results, it was good to note that all students did make some progress. Those who still need to move are further will do so with explicit teaching to their needs.

This Ministry project has been a fantastic opportunity for our school. M has shared with her work colleagues her knowledge of what she is trying to achieve and the practices she has used. The children have been able to move their thinking around numeracy and will continue to improve because they have had a significant amount of input into their mathematical knowledge. To have the time available to implement a project like this has been most beneficial as it gives us an idea of practices we can use and it also gives us fantastic entry/exit data on children. From M's work, we now have a range of strategies that the teachers can draw on and which they can implement in their own teaching groups. Thank you for the opportunity. We believe our staff, and most importantly our children, are going to benefit from our participation in this project.