This unit introduces and explores 24-hour time and time zones.

In this unit students learn that clock time varies around the world. For example, the same moment in time is read as 7:35pm in New Zealand, 5:35pm in Melbourne, Australia, and 6:35am in England, since in summer NZ is on daylight saving time. In fact, what to call a moment in time is arbitrary so nations adopt calibrations (setting of clock times) to suit the lifestyles of citizens. The Earth rotates 360⁰ every 24 hours (roughly) meaning that while it is daylight on one side of the Earth, it is night on the other side, excluding locations close to the North and South poles.

It is generally accepted that 12 noon is midday, halfway between dawn and dusk, the rising and setting of the sun. Therefore, midday occurs at different time points around the globe, based on the longitude of the location. The clocks of time zones are calibrated so that 12 noon is at the midpoint of dawn and dusk in that country. Large countries have multiple time zones, that is points at which the clock reads midday, e.g. Australia has three time zones, Russia has 11 time zones.

With the advance of communication technology and air travel students’ lives are likely to be affected by time zones. Suppose you book a flight from Auckland to Perth. It leaves at 11:10am and arrives at 1:35pm on the same day. That seems like a flight time of only 2 hours and 25 minutes. It is hardly worth buying the entertainment and meal package. It turns out that the flight takes 7 hours and 25 minutes. That is because Auckland time is five hours ahead of Perth time. When you leave Auckland, the time in Perth is 6:10am.

Communicating by email, Skype or phone with someone in another part of the world requires you to know the time zones. England is 13 hours behind New Zealand time. If you Skype a friend at 7:00pm New Zealand time you will wake them up at 6:00am England time.

The International Date line is another complication. The line lies longitudinally between New Zealand and Samoa. It is the line created to separate one calendar day from the next. When it is Wednesday in New Zealand it is Tuesday in Samoa. It is possible to fly three hours from Auckland to Apia and arrive 20 hours before you left.

In the first session we introduce the idea of time zones using a globe and by making a phone or internet call.

If it possible, darken the room. Have someone hold the globe and another student shine the torch on it. An old overhead projector is ideal in place of the torch.

Imagine that globe is the Earth and the torch/OHP is the sun. How do these bodies move in relation to one another?

Students should suggest that the Earth orbits the sun.

They should also know that the Earth rotates on its axis.

Act out one day. That means very little movement of the Earth around the Sun while a full rotation about the axis occurs. Note that the Earth rotates in an anti-clockwise direction (West to East) which explains why the sun appears in the Eastern sky at dawn.

Discuss what you can see with a classmate. What does this mean for people and animals living on the Earth?

Out of the discussion students should express the idea that when we are in daylight there are some places in the dark. All places, except the poles in Summer and Winter, undergo day and night in a 24-hour period. You may need to fix a blob of blutac on the globe at the location of your school, and another blob at a location in another country. Rotate the globe, stopping at various points, in the turn.

What time is it in each place?

Stop the rotation in a position when the sun is shining directly at New Zealand.

What time will this be in Aotearoa? (12 noon unless it is daylight saving. With DLS the time will be 1:00pm)

Think about the time in these locations:

There are many online videos depicting the movement of the Earth around the Sun. Be sure they represent the axis of the Earth at an angle to the plane of rotation as that explains the seasons. 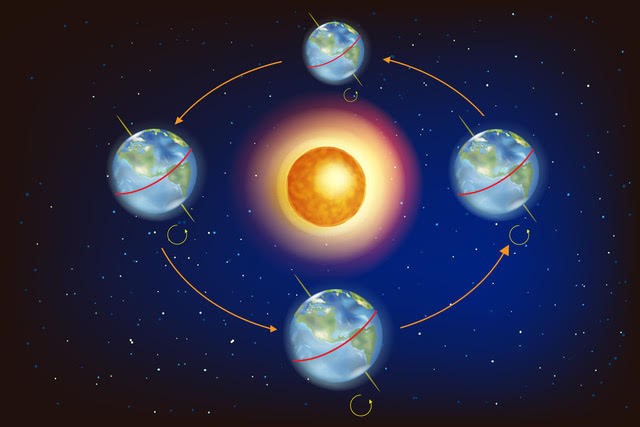 Explain that a system was invented to deal with differences. Show Slide One of PowerPoint One that shows time zones.

Talk to a classmate about what you notice on this map of the world. Be ready to explain what you see to everyone else.

Have you ever tried phoning or Skyping someone in Australia? It’s [time] at our place. They live in [location]. What will the time be over there?

Let students predict the time in the Australian location using the time zone map.
Using a phone or Skype ring someone in Australia. Be sure to ask them the time and the latest cricket score.

How many time zones do you think Australia has?(three)

Let students use the map.

Why does Australia have three time zones? (It is a big country from West to East).
Look for Russia on the map. How many time zones does Russia have? (11 zones)

Provide the students with copies of Copymaster One to work from in pairs. After a suitable time discuss the answers together as a class.

Question One: This is an open-ended problem so many different answers are possible. From New Zealand any city in South-East Asia will work, such as Kuala Lumpur, Saigon, Bangkok will be five hours different. Mountain State cities in USA such as Denver and Salt Lake City are 5 hours different as well. Any city can be chosen as the reference.

Question Three: Ireland is 12 hours behind NZ time. The rugby test will start at 7:35am NZ time.

Question Four: Korea is four hours behind New Zealand time. The plane takes off at 5:15 am Korean time and lands at 6:15 pm (13 hours later).

Question Six: New Zealand has a special time zone for the Chatham Islands so it has two time zones.

In this session students learn to express am and pm times in 24-hour time. They use 24-hour time make calculations about time difference between two different locations.

Use PowerPoint Two to introduce the lesson. Work through the first five slides setting the context of departing on an International flight. Slide Five has a paper boarding pass and asks students to find important information. The time on the pass is 18-45 which might be written more correctly as 18:45 or 1845.

Some students may know that the time is given in 24-hour time, sometimes referred to as military time. There are many 24-hour conversion tools online, including this one:

You may need to use the conversion tool to count in hours and minutes until 18:45 is reached, noting the significance of 12:00 noon as the halfway point through a 24-hour day. Proceed through the slides showing other boarding passes to work out the 24-hour times.

Copymaster Two provides a sequence of problems for students to practise reading and writing 24-time. Ask students to work on the problems independently at first before sharing their answers with a partner.

In this session the class practise working with 24-hour time in the context of the commuter train that runs from Waikanae to Wellington. Use of 24-hour time for public transport is quite rare in New Zealand but is very common in Asia and Europe.

Look at the first three slides of PowerPoint Three to introduce the context of two commuters, Henare and Leisha, who work in central Wellington. Commuting can result in long working days.

What does it mean to commute to work?

Why might people commute rather than drive their car? (Cost, time, and minimising carbon footprint are important reasons)

If you were Henare and Leisha what would be the best time to start work? Explain why you would start then.

Slide Four has the early morning timetable for the Kapiti Line. It is a simplified timetable compared to the actual timetable but the times are real.

How much time does it take Henare and Leisha to train from Waikanae to Wellington? (Note that there are two services; normal and express)

How much longer does it take the normal train than the express train? (3 minutes)

Which train would you advise Henare and Lisa to take? Why?

Expect the students to consider the ramifications of beginning early or late to avoid the peak periods. An early start means an early return to home, especially if two hours work can be completed on the train, using the internet.

Once the students select a start time show Slide Five which shows the afternoon/evening timetable for Wellington City to Waikanae. Choose several times to see if students recall how to convert from 24-hour time to pm time. For example, the 17:01 train departs at 5:01pm.

Provide the students with Copymaster Three to work from in pairs. Look to see that your students:

In this session students investigate departure and arrival times of international flights. Students are given two of three conditions and asked to find the third. Departure time, flight time or arrival time might be omitted. In solving the problems students need to compare time zones using 24-hour time and make calculations with time in hour and minutes.

What is the time difference between Brisbane and Singapore?

What do you notice about the clocks at each location as the flight proceeds?

From the departure times in each location how could you calculate the flight time?

If you are told the flight time how can you calculate the arrival time in the country that you land in?

The last question is the most common problem that travellers face. Arriving in an unfamiliar location late at night is alarming and sometimes leads to dangerous situations while travelling to accommodation. The easiest method is to workout the departure time at the arrival location. For example, in summer Adelaide is 2½ hours behind Auckland. An Auckland flight that departs at 2:59pm (1429) is leaving at 12:29pm (1229) Adelaide time. If the flight lands at 5:18pm (1718) then the flight time is calculated as 1718 – 1229. 17 – 12 = 5 hours but the flight is slightly less than that. 18 – 29 = -11 minutes so the flight is 5 hours less 11 minutes or 4 hours and 49 minutes.

Give your students copies of Copymaster Four to work from. Students will need to access a site like www.timeanddate.com/worldclock/ to find the time difference between cities and also use google maps, or a similar programme, to establish where those cities are. Look for students to convert the departure time at the origin to the time at the arrival destination, then find the difference between arrival and departure times. Do students recognise that time operates on a base of 60 so that normal decimal calculation methods need to be adjusted?

In this session the class practice using timetables and their knowledge of time zones to plan a trip to London from where they live.

This week we have been working with 24-hour (military) time, discovering how time zones work and why the zones are needed. We have calculated times in other parts of the world when given New Zealand time, and found out how to work out arrival times for long international flights.

Some links from the Figure It Out series which you may find useful are: