This unit introduces the fact that fractions come from equi-partitioning of one whole. So the size of a given length can only be determined with reference to one. When the size of the referent whole varies then so does the name given to a given length.

‘Fractions as measures’ is arguably the most important of the five sub-constructs of rational number (Kieren, 1994) since it identifies fractions as numbers, and is the basis of the number line. Fractions are needed when ones (wholes) are inadequate for a given purpose. This purpose is usually some form of division. In measurement lengths are defined by referring to some unit that is named as one. When the size of another length cannot be accurately measured by a whole number of ones then fractions are needed.

For example, consider the relationship between the brown and orange Cuisenaire rods. If the orange rod is defined as one (an arbitrary decision) then what number is assigned to the brown rod?

Note that eight tenths and four fifths are equivalent fractions and the equality can be written as 8/10 = 4/5. These fractions are just different names for the same quantity and share the same point on a number line. The idea that any given point on the number line has an infinite number of fraction names, is a significant change from what occurs with whole numbers. For the set of whole numbers each location on the number line matches a single number. Some names are more privileged than others by our conventions. In the case of four fifths, naming it as eight tenths aligns to its decimal (0.8) and naming it as eighty hundredths aligns to its percentage (80/100 = 100%).

Understanding that fractions are always named with reference to a one (whole) requires flexibility of thinking. Lamon (2007) described re-unitising and norming as two essential capabilities if students are to master fractions. By re-unitising she meant that students could flexibly define a given quantity in multiple ways by changing the units they attended to. By norming she meant that the student could then act with the new unit. In this unit of work Cuisenaire rods are used to develop students’ skills in changing units and thinking with those units.

Consider this relationship between the dark green and blue rods. Which rod is one? Either could be defined as one and the other rod could be assigned a fraction name.

Re-unitising and norming are not just applicable to defining a part to whole relationships like this. In this unit students also consider how to use re-unitising to find the referent one and to name equivalent fractions. For example, below the crimson rod is named as two fifths. Which rod is the one (whole)? If the crimson rod is two fifths, then the red rod is one fifth. Five fifths (red rods)form the whole. Therefore, the orange rod is one.

The learning opportunities in this unit can be differentiated by providing or removing support to students, by varying the task requirements. Ways to support students include:

Tasks can be varied in many ways including:

The contexts for this unit can be adapted to suit the interests and cultural backgrounds of your students. Cuisenaire rods (rakau) are a media often used in introduction of te Reo so some students may already have encountered them. Knowing the relationships between rods of different colours, without having assigned number names to the rods, is very helpful in easing cognitive load. Other contexts involving fractions of lengths might also be engaging for your students. For example, the fraction of a race or journey that has been covered at different points is practically useful. Consuming foods that are linear, such as submarine sandwiches, bananas, or sausages, might motivate some learners. Board games that have a particular number of steps from start to finish provide opportunities to look at a fraction as an operator.

Students are unlikely to have previous experience with using Cuisenaire rods since the use of these materials to teach early number has been mostly abandoned. Their lack of familiarity with the rods is a significant advantage for students as they will need to imagine splitting the referent one to solve problems.

In this session the purpose is to reconstruct the one rod. Students connect from part to whole as opposed to whole to part.

The aim of this session is to develop students’ mental number line for fractions. Inclusion of fractions with whole numbers on the number line requires some significant adjustments. These adjustments include:

This week students will be learning about fractions, like three quarters and two thirds. We will be using some materials called Cuisenaire rods which are lengths of plastic or wood. They look like this: 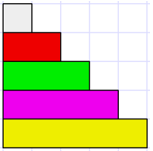 Your child should be able to name fractions of a given rod. For example, they might say that the light green rod is three fifths of the yellow rod.

There is an online tool that lets you play with Cuisenaire rods on this page: