This is a level 3 activity from the Figure It Out series.
A PDF of the student activity is included.

Making comparisons is an important part of most statistical investigations. In this activity, students compare the effectiveness of different catapults. To do this, they need to systematically gather measurement data, and then find ways of processing and analysing it in order to reach conclusions.

In this activity, students build catapults out of simple materials, use them to fire cotton wool balls, and then evaluate their performance. The activity requires teacher guidance and is suited to a whole-class lesson. It could be linked to a wider unit on machines or to a technology project. Before beginning, get your students to explore the history of catapults.
Depending on your students, and on how much time you plan to allocate to the activity, you could give them no guidance, get them to research the Internet for ideas, or show them either a working model that you have built yourself or a You Tube video.
Students will construct, test, and refine their catapults in an iterative cycle, so ensure that protocols for working are discussed and agreed before the materials are made available. Assign a dedicated place for trialling.
Once the students have working catapults, they will need to decide how to measure the two variables, power and accuracy. The answers provide some suggestions. Expect your students to sort the best proposal from competing proposals via a process of mathematical argumentation.
The DVD Making Language and Learning Work 3: Integrating Language and Learning in Years 5 to 8 (Curriculum Focus, Year 7 Technology) includes an example of a class working within the context of making lanterns and shows how the teacher incorporates support for language within a mainstream classroom lesson.
Once data has been collected, it needs to be analysed to determine which of the catapults is best. Ask your students to suggest how they might do this. The simplest way is simply to add up the points or measured distances and see which group gets the greatest or least total, depending on whether power or accuracy is being measured and how points are assigned.
Alternatively, students could compare dot plots. Although more challenging, this method will be more statistically valuable, introducing as it does the ideas of spread and central tendency (the tendency of values to cluster around a particular point).
Below are four notional sets of data. Note that distances have been rounded down to the nearest 10 cm (in other words, distances have been grouped in 10 cm intervals). This avoids overlapping dots and makes the overall pattern easier to see.

If your students analyse the four dot plots, they will see that each catapult fired 10 shots and scored an identical total distance, 1 300, so simply adding distances to find a winner will not work. But although total distance is the same for each catapult, spread is very different. Get your students to discuss in groups which of the catapults most consistently fires a good distance and to compare their thinking with that of other groups.
Once catapults have been ranked for fire power (1st, 2nd, 3rd …), they can be similarly ranked for accuracy. One way of finding an overall winner is to combine the two rankings (for example, 1 + 2 = 3) and see which catapult gets the best (lowest) combined ranking.
This activity requires students to work together and be considerate of others, which gives them opportunities to develop the key competencies participating and contributing and managing self.

Investigate angles by exploring the optimal angle for firing. The following link provides a fun way for students to develop their awareness of angle size: www.xpmath.com/forums/arcade.php?do=play&gameid=74

Language areas like comparisons are large and complex. You will need to select small chunks to focus on at one time and keep adding more each time your students encounter the language.

Technology has helped people for millions of years. It has also provided the means to cause harm. Often, in times of war, technological progress has accelerated. Sometimes, military innovations can be put to peaceful purposes, for example, radar and GPS. 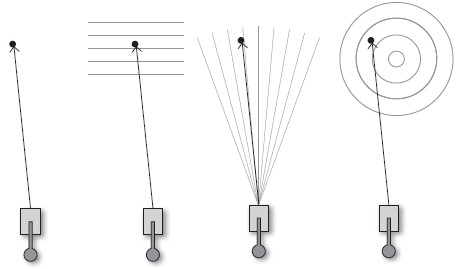 For power, use a measuring tape to find the direct distance from the base of the catapult to the point at which the ball hits the ground. Alternatively, mark a set of parallel lines directly in front of the catapult. Score points for each line you get the ball over.
For accuracy, mark a set of lines that radiate at equal angles from the catapult. The closer you get to the centre line, the greater your score. Alternatively, set up a series of concentric circles on the floor. Score maximum points for hitting the bull’s eye and fewer points for the outer circles.
4. Firing range set-up will vary, as will measuring and recording systems. Power (distance) can be recorded as raw data (cm) or points. Accuracy would usually be measured as points, but it could also be measured in cm (distance from target). The target could be a cross marked on the floor:

For power, you want maximum distance from the catapult. For accuracy, you want minimum distance from the target. Design your scoring system with this in mind.
Once you have completed the firing and scoring process, you will need to process your data so that you can come up with a result. You may find that simply adding the points in each category will give you the information you need. But you should be able to explain why your system is fair!
5. Discussion will vary.
6. Practical activity.