Students are likely to use a ‘Trial and Improvement’ strategy for finding circle numbers. Encourage them to use such a strategy but to also look for a short cut as they do so. They may then notice that the circle number opposite the even box number is half that box number. This rule is developed in Task 2. Once noticed, such a rule tends to be generalised for all triangular arithmagons. However it only produces integer values when the box number is even and when the box numbers form a linear sequence. This provides a valuable lesson for all students as they seek to develop rules arising from pattern spotting. Rules that seem generalisable may not be so. For example, the box number sequence 38, 48, and 68 in Question 3c of Task 2 is not linear. The circle number opposite 48 is 29, not 24 which application of the rule may suggest. Questions 4 and 5 of Task 2 provide an opportunity to deepen students’ understanding of this first rule; when it works and when it doesn’t. 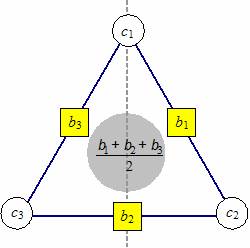 While it is not intended that students at this stage use algebra to write the rule for triangular arithmagons, students should be able write the rule in words. Using algebra however gives the following result.

The centre number can be represented by .

In Session 4, students use a different approach to develop this result. 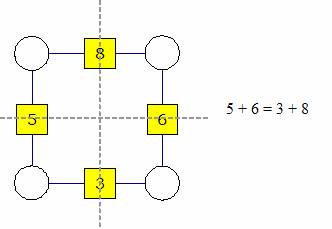 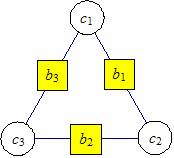 These results are of course the same as the result derived from the ‘centre’ number approach in Session 2 (see above.)

The results for arithmagons that have an even number of sides are as follows.

In order that these arithmagons can be solved, ‘the total of the values in the odd-numbered boxes must be the same as the total of the values in the even-numbered boxes’. Arithmagons with n sides, where n is even, and which can be solved, have an infinite number of solutions since there is an infinite number of ways that two totals that are equal can each be made from n/2 values. 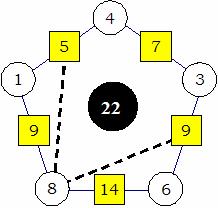 Notice that the ‘centre’ number approach used for solving triangles in Session 2 can also be applied for other arithmagons. For example, the circle number, 8 in this pentagonal arithmagon can be found by subtracting the box numbers 5, and 9 from the centre number, 22. So for a pentagonal arithmagon, with circle numbers represented successively by c1, c2,… c5, and box numbers represented successively by b1, b2,… b5, the centre number can be represented by

The circle number c1, can then be found from

which which is the same result derived using the approach in Task 10.

Each session in this unit comprises a sequence of tasks or challenges. It is suggested that students have an opportunity to engage in each task by themselves before they begin sharing their ideas with other students or with their teacher. The role of the teacher is to first listen carefully to students as they try to explain their thinking to others and then interact with the students only when they or their peers appear to have reached an impasse. Such interactions might then be to help clarify students’ thinking or even redirect thinking where necessary.

Notes have been included to provide mathematical background including solutions, as well as on aspects that are likely to pose some difficulty for students. The exact nature of any interactions will depend on the situation and on the thinking progress that has been made.

In this session, students are likely to use a ‘trial and improvement’ strategy to find circle numbers. Encourage students to look for short cuts (see Task 2) that result in correct solutions. The tasks are designed to draw students’ attention to sets of box numbers for which the short cut works and doesn’t work. Identifying arithmagons that can be solved but for which the short cut doesn’t work can encourage further exploration into new and more robust short cut methods. Begin by introducing students to the rules for arithmagons, ie. that each box number is the sum of the two circle numbers adjacent to it.

Whenever students are asked to see if they can find a rule, ask them to try writing the rule in their own words. Use their efforts as the basis of class discussions to clarify the meaning of the rule for everyone in the class.

When attention turns to square arithmagons, it is likely that some students will endeavour to merely extend their ideas related to triangular arithmagons. They will find however that they will need to take a fresh look at this new arithmagon. Interestingly the first square arithmagons they encounter all have multiple solutions – in fact, whenever a square arithmagon can be solved, there is an infinite number of solutions when negative or fractional values are permitted. It might be interesting to see if students spontaneously widen their perspective to include negatives etc. Square arithmagons can be solved when opposite pairs of box numbers have the same total.

In this Session, students have an opportunity to work with algebraic symbols to formulate and solve linear equations and to prove results for triangular arithmagons. Notice that rather than using algebraic symbols, x and y etc for box numbers or circle numbers, it is likely to be more helpful to use b1, b2 and b3 etc, to represent successive box numbers and c1, c2 and c3 etc to represent successive circle numbers. Students may need help to understand how this system of subscript symbols work.

It is also likely that students who will get most out of this and the next session will be those who can work accurately with symbol operations and manipulations.

In this Session, students extend their algebraic work to square, pentagonal, hexagonal, heptagonal, and octagonal arithmagons. In other words they examine the generality of solutions for arithmagons.