GM5-4: Find the perimeters and areas of circles and composite shapes and the volumes of prisms, including cylinders.
AO elaboration and other teaching resources
Student Activity 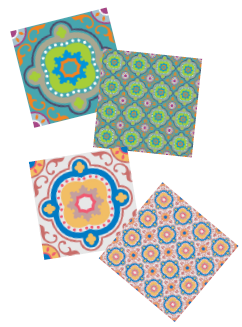 Karen discovers some old square tiles in the garage.

She plays around with them and makes different shapes.

She wonders whether the perimeter of these shapes increases as the area increases.

Mikaere thinks it's obvious. Do you?

In this problem students explore the relationship between area and perimeter, by investigating the conjecture that the perimeter of a shape increases as the area increases. This problem also involves students in exploring the relationship between these two measures in several polygons.
Functions explore how one thing varies as the result of the change in another, and are an important part of mathematics.

It may be useful if students have already been introduced to the problem, Peter’s String, Level 4.

Karen discovers some old square tiles in the garage. She plays around with them and makes different shapes. She wonders whether the perimeter of these shapes increases as the area increases. Mikaere thinks it's obvious. Do you?

Maybe Karen is right if she sticks to rectangles. If the area of a rectangle increases, does its perimeter have to increase too?

What if Karen limits herself to a set of similar shapes?

Solution
Karen made a conjecture: As the area of objects increase, their perimeters also increase. We have to justify or refute this conjecture.

There are two useful strategies for dealing with investigations such as this. One is to look at simple cases. The other is to investigate extreme cases.

Try the simple case first. Take Karen’s basic tile and play around with some simple shapes and hope that this gives us enough information to settle the conjecture, or at least to put us on the track of a solution.

Assume the square tile has an area of 1 unit and a perimeter of 4 units.

By combining tiles, we can make new figures and we can calculate their areas and perimeters. If we record these numbers we can begin to get a picture of how perimeter varies with area.

So the second figure that we make has an area of 2 and a perimeter of 6.

This third figure has an area of 5 and a perimeter of 12. If a new tile is added, the area goes up to 6, but the perimeter goes down to 10.

So, it’s possible to increase the area of a figure but decrease the perimeter in the process. Hence the conjecture is false.

The problem can also be looked at through extreme cases as follows. The argument presented in Peter’s String, Level 4 is useful. Join the two ends of a piece of string. Form the loop into a square. Now form it into a long very very thin rectangle. Both figures have the same perimeter, but they have very different areas. Thus it is possible to increase the area without increasing the perimeter.

What if we stick to similar figures? Use a rectangle as the basis for our first set of similar shapes. If we take a rectangle that is 4 units by 6 units, then a similar rectangle will have sides 4k by 6k, where k is some positive number. (This way corresponding sides are in the same ratio, a necessary condition for similarity.) For these figures, the area is 24k2 and the perimeter is 10k. So as the area increases (this is done by k increasing), the perimeter also increases.

This tends to suggest that similar figures will have the property that as the area increases then so does the perimeter. At this Level, it isn’t possible to prove this for all shapes but it is possible to do it for a range of shapes that give evidence for the conjecture. Experiment with triangles, quadrilaterals and polygons. You should find in each case, that if the basic area of the shape is A and its perimeter is P, then the area of a similar figure will be Ak2 and its perimeter will be Pk.