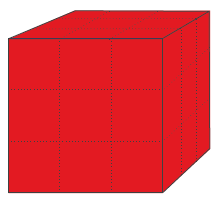 Carrie has glued some cubes together to make a large solid cube with nine small cubes showing on a face.
She paints the large cube red.

How many of the original small cubes have:

This problem encourages students to visualise 3-dimensional objects. It is a useful task to get them to think about the problem with their eyes closed. This way they can improve their imagination of 3-dimensional objects. It is also useful to get them to hold cubes in their hands and get a real feeling for them. Geometrical ability is enhanced by combining the information sent to the brain by all the senses.

Students will also need to know, or quickly be able to find, simple facts about cubes such as the number of faces, corners and edges that they have.

This problem gives the opportunity to introduce a teaching point on Euler’s Polyhedral Formula. For solid figures made up of plane faces and without ‘holes’ Euler’s formula links the number of vertices (v), edges (e) and faces (f) by the equation

The cube provides a nice illustration of this and links in with other Platonic solids such as the dodecahedron, the icosahedron, the octahedron and the tetrahedron.

Carrie has glued some cubes together to make a large solid cube with nine small cubes showing on a face. She paints the large cube red.

How many of the original small cubes have:

What percentage of the surface of all of the original cubes is painted?

To find the required percentage we first work out the number of faces altogether and then the total number of faces painted. Originally we had 27 faces, so there were 27 x 6 = 162 faces.

Do you find that surprising? Should it have been obvious that only a third of the original faces were coloured?

Printed from https://nzmaths.co.nz/resource/carrie-s-first-cubes at 2:16pm on the 19th September 2020