In this unit students represent a quadratic relationship using spatial patterns, tables, graphs and equations, recognising the key features of a parabola, and finding unknowns from the graph of a parabola and from simple quadratic equations. Procedural fluency and conceptual understanding are developed together.

The concept of a variable is a difficult one for students to grasp. A variable is a quantity that can take up different values. In algebra variables are represented as letters. We often refer to a letter symbol as a variable, when sometimes we mean an unknown specific value, sometimes a generalised unknown (lots of possible values), and sometimes a variable that changes in relation to other variables in a situation.

Before beginning this unit, students probably have constructed linear graphs with integer values and will have solved simple linear equations. Graphs provide an accessible visual representation of the relationship between two variables. Connecting graphs and equations from the same context supports students to understand of how multiple representations connect and are useful for solving problems.

For a structured situation, research indicates that finding a rule for the general term can be a difficult for many students. They often first notice the iterative (recursive) rule that gives the value of a term of a sequence from the previous term. However, they are sometimes unable to find the general relationship between the independent and dependent variables, or apply the inverse relationship.

This unit should follow delivery of linear algebra and linear graphing at Level 5. The teaching of skills occurs within contexts that provide opportunities for discussion and development of procedures and concepts. As each learning outcome is explored there may be a need for consolidation through more traditional exercises, such as those found in text books, worksheets or online practice activities. Some students may be quick to grasp these concepts and would benefit from extension tasks such as those found in the Rich Learning Activities.

For each session a possible sequence for students to follow is:

Each session  is initially presented as a problem or series of problems for students to solve. Instructions and questions relating to the ideas above that teachers may give students are italicised. As stated earlier it is not suggested that all the learning outcomes should be taught during each session, therefore not all the instructions should be given to all the students. If the first session is to be used for diagnostic assessment, then most of the instructions can be worked through to find what the students are capable of. In subsequent activities one or more of the instructions may be focused on, but other instructions may be given, either as enabling or extending prompts.

If you run out of counters, for the next term in the sequence, or get tired of drawing look for other ways to represent the total number of plants.
How many plants would be needed for the 7th grouping?
If Mary has 650 plants, what is the largest group she can make?

Use Animation 1 to encourage reflection about how the pattern grows.

How many plants would be needed to make a total of 7 groups in this growing pattern?

How many plants would be needed to make a total of n groups in this growing pattern?

This might lead high achieving students to consider how to find the sum of n square numbers. That involves some complicated algebra about series that is usually dealt with at Level 7.

Session 2: Attack of the hungry rabbit

Return to the pattern of Mary’s Garden (Square numbers). Discuss how the spatial pattern, table and graph relate.

What do you notice about the difference between the numbers of cabbages (c) as the group number increase? (Odd numbers)

Look at the spatial pattern. Why are the differences odd numbers? (Building on a pattern to form the next requires two lines of the side length plus one. 2n + 1 is always an odd number)

What was the equation for the relationship between g and c, the group number and the number of cabbages? (c = g2)

Let’s see what happens when we graph that equation. Mary’s garden pattern generates the parabola y = x² for a domain of natural numbers only. Use an online graphing tool or a spreadsheet to create a graph showing group number as the independent variable (horizontal axis) and the number of cabbages as the dependent variable (vertical axis). Note that some programmes require you to use x and y as the variable names. 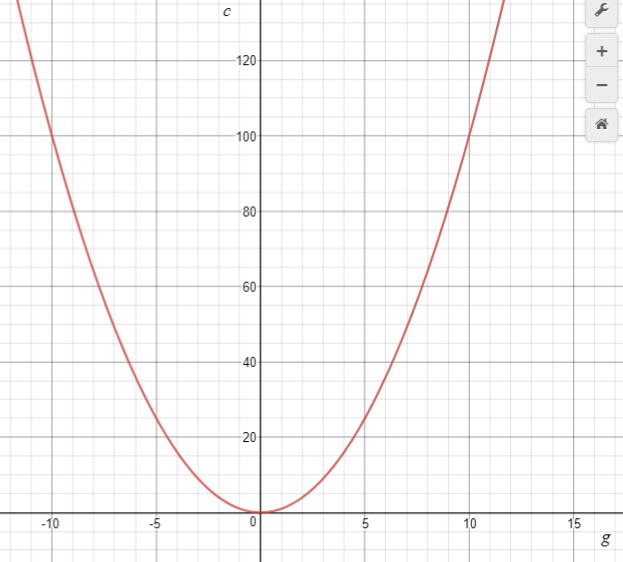 Compare the graph students drew of Mary’s pattern of cabbage groups with the graph that the tool has produced.

What is the same and what is different about the two graphs?

Expect students to note that a continuous line has replaced discrete points and that the parabola has two ‘sides’ as the domain of the online graph extends into negative real numbers. Point out that the online graph is a result of imagination rather that practical application to Mary’s problem. Use the online graph to read out solutions to problems like: 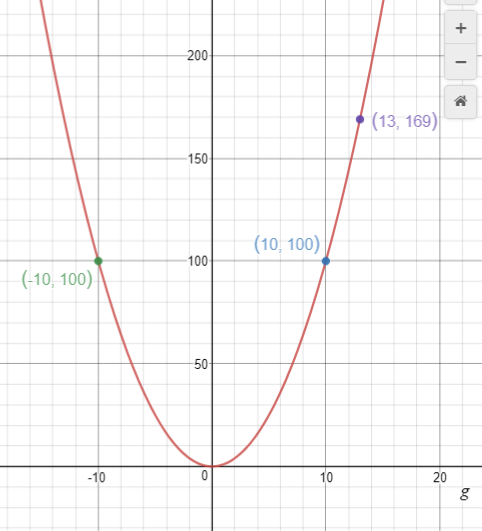 Show the students the three cabbage patterns (Animation 2). For each pattern ask students to:

Let the students work in partnerships to explore the patterns before bringing the class together. Focus the discussion as follows:
What did you notice about how each pattern grows?
How is the pattern alike and different from Mary’s pattern?
How did the differences affect you table and equation?
How did the change in equation result in a change in graph?

Some important points are:

The first pattern is c = g2 – 1. The pesky rabbit has eaten one cabbage from each group. The result is that each value for c in the table is one less than the corresponding value in the table for c = g2.

The second pattern is c = 2g2. Mary has allowed for her rabbit problem by planting double the number of cabbages in each group. The result is that each value for c in the table is two times the corresponding value in the table for c = g2.

The third pattern is c = (g + 2)2 + 1. Mary is expecting a rabbit invasion! The result is that to find each value for c in the table find the corresponding value two groups ‘ahead’ in the table for c = g2 and add one.

The effect on each graph is as follows: 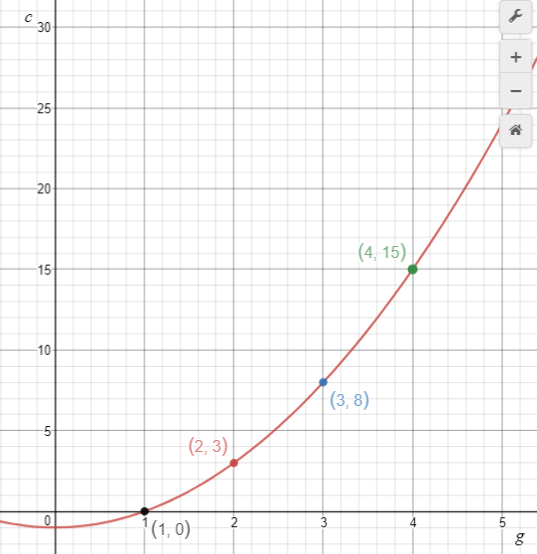 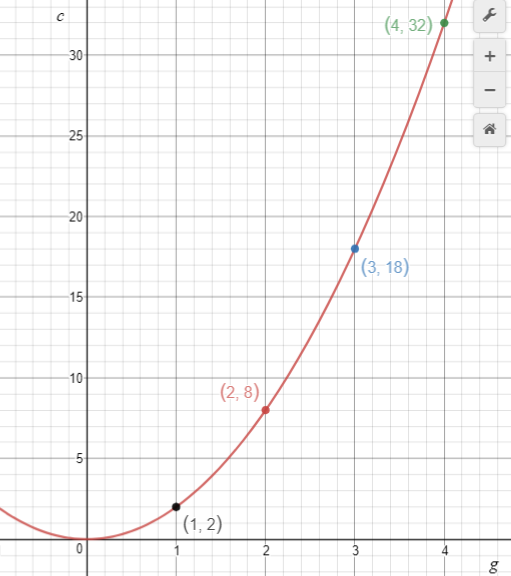 What happens to the graph if you add or subtract a constant to x2? Try these examples:

What happens to the graph if you multiply x2 by a co-efficient? Try these examples:

What happens if you add or subtract a number from x before you square it? Try these examples:

What happens if you combine these transformations? Try these examples:

Introduce the three patterns using Animation 3. You may like to pause the animation between patterns to discuss what students ‘see’. Copymaster 1 gives the patterns in paper form. For each pattern ask your students to:

You may need to explain the last instruction. That is, if given any value for the group number, how would you work out the total number of lettuces?

Allow the students plenty of time independently or in small groups to work on the problems. Prompt them to look for connections. Working out a rule for the Pattern One should help them solve the other two patterns.

Different ways of structuring the patterns lead to different general rules. This provides rich opportunities for manipulating the expressions. For example, consider these three ways to structure Pattern Three.

Students proficient at manipulating expressions may enjoy proving algebraically that the expressions for general terms are equivalent. For example:

Record the general rules from the previous pattern activities.

Begin with the highlighted expressions. Point out that general rules can now be written as equations; c = n2 + n, and c = (n + 1)2 – 1. Ask students what they expect the graphs of these equations will look like. Remind students of what they discovered in Session 1. The graph of c = (n + 1)2 – 1 should be a translation of y = x2 one unit to the left and one unit down. Let the students explore their predictions using an online graphing tool or graphics calculator.

Students should note that graphs of equivalent equations are the same. They might also note the connection between translation of the vertex from (0,0) and the constants in the equations. Students at this level are not expected to express equations in vertex form but they can develop some sense of positioning of the graph.

Give students problems to solve using their graphs, such as:

How many lettuces are in the Group 8 of Pattern One? …Group 12 of Pattern Two? etc.

The next phase of the lesson requires students to use abductive reasoning. Abduction involves seeing structure in one member of a pattern and applying that structure to other members. Therefore, it is quite different to the inductive reasoning that students are expected to apply so far. In the attached PowerPoint one or two members of each pattern are shown. In general, ask the following questions:
What ways could you organise the cauliflowers to count them? (Usually this involves seeing shapes)
What do you expect the group either side of this one to look like?

Encourage students to look for ‘chunks’ in the figure and relate the chunks to general rules they may have discovered so far. For example, Pattern two might be chunked any of these ways: 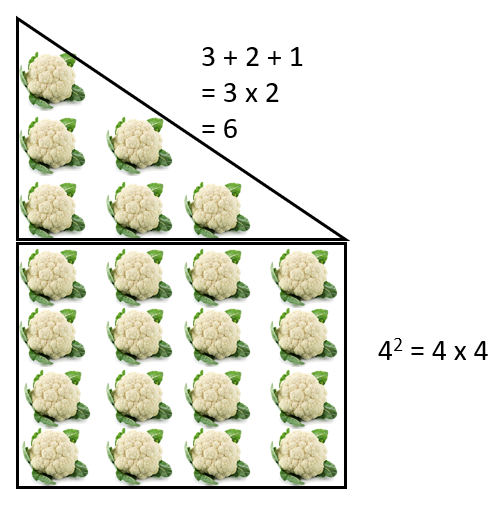 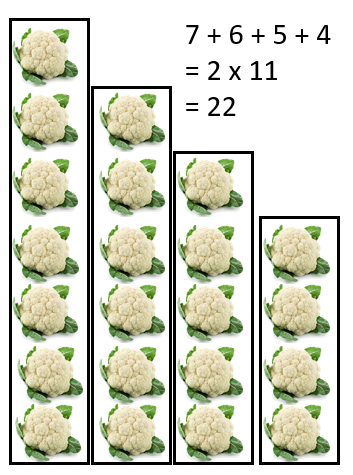 After you have discussed how each pattern might be structured give students Copymaster 2 (one copy between two or three students). Some students may need rectangular dot paper, so they can draw the first few members of each pattern. The challenge is:

Create a general rule that tells the number of cauliflowers for any group number (n).
Predict what the graph of your rule will look like then draw it on using graphing tool.

As students work watch for:
Do they create a growing pattern that is consistent with the structure of the given member?
Do they connect the Group Number as independent variable?
Do they identify the elements that change and those that stay constant as the pattern grows?
Can they express the relationships between the group number and the ‘chunks’ to create a general rule?
Do they anticipate the shape and location of the graph?

Gather the class to process students’ solutions. You may choose to focus on one pattern for which students have created the most diverse solutions. Try to capture generalisations in as many ways as you can. For example, consider Pattern Four. 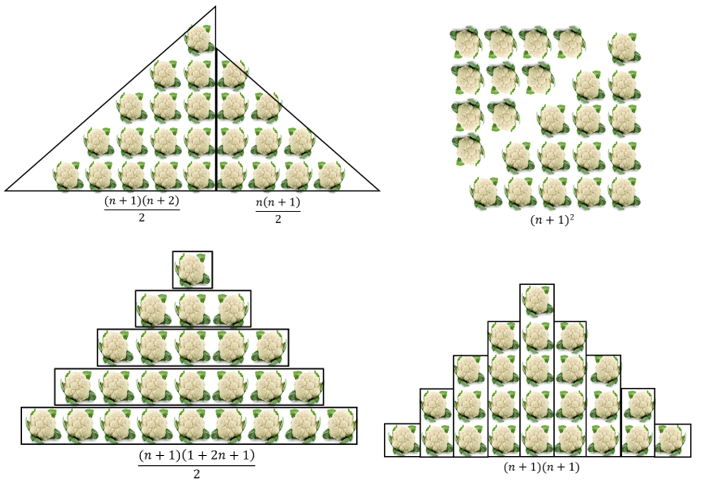 You might use equivalent expressions to practise rearranging expressions. For example: 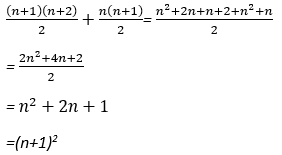 Graphs and equations can be used to solve problems with specific unknowns. For example, A general rule for Pattern Three is:

(From the surrounding square less the nth triangular number)

How many cabbages are in the 15th pattern?

In equation form this is:

In graphic form this is: 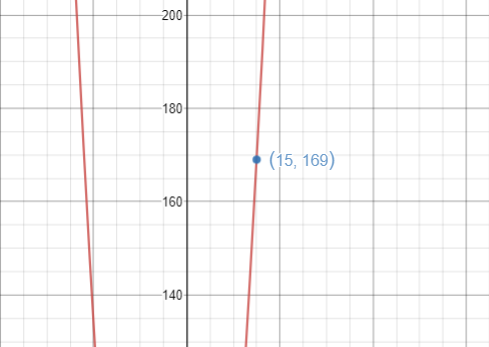