Students learn about random events, and the patterns and variations occurring in such events. The context is a jube machine that randomly packages jubes of different shape and colour. The jubes in the machine make up a sample space based on an even distribution of 1:1 or 1:1:1 or an uneven distribution of 2:1. The focus throughout the series is the notion of long-run data being more reliable than short-run data due to random variation. 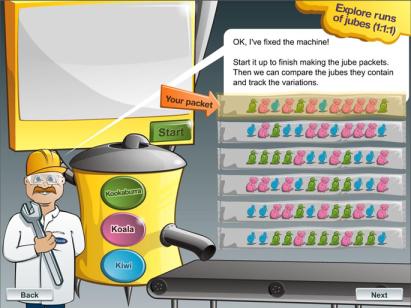 At the Fantastic Fruit Jube factory, a machine packages jubes in random order into packets, each holding 12 jubes. The jubes are dispensed from a container holding different types of jubes in different proportions (depending on the learning object).

Two approaches underpin the learning objects in the series.

In both the explore and analyse subseries, the various learning objects allow students to investigate:

In addition, both the explore and analyse subseries allow students to investigate different outcomes when the sample space contains different ratios of jube types, including 1:1; 1:1:1; and 2:1.

Each of the 17 Random or not learning objects automatically collates experimental results and displays them as frequency graphs.

Random or not: open investigations

This is an open-ended exploratory tool for teacher and student use. Students can explore relationships between ratios, sample size, uneven distributions and random variation.