In this unit students collect data about favourites and present them in a variety of ways, starting with tally charts, and building up to using Microsoft Excel to create bar charts.

At Level 2 you can expect students to be posing a greater range of questions. They will also be helped to understand some of the issues involved in conducting surveys and learn new methods for collecting data. While at Level 1 students collected data and chose their own ways to display their findings, at Level 2 they will be introduced to uniform pictograms, tally charts and bar charts. More emphasis here will also be placed on the discussion of the data and the making of sensible statements from both the student’s own displays and the displays of others.

In a uniform pictograph the pictures are drawn on uniform pieces of paper. This means that the number of objects in each category now bears a direct relationship to the size of each category on the display. An example is shown in the diagram below. 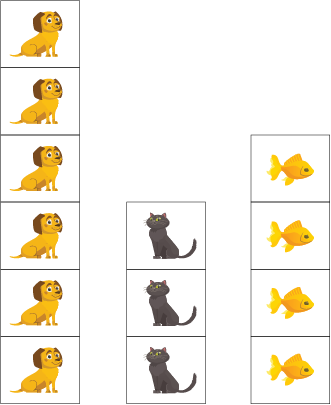 In a further development the pictures can be displayed on a chart with axes and titles. The vertical axis can be numbered to match the pictures. 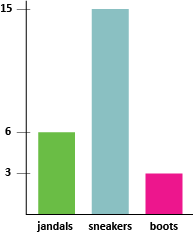 The example above shows the types of shoes worn in the class on a particular day. There are three types of shoes: jandals, sneakers, and boots. The height of the corresponding rectangles shows that there are 6 lots of jandals, 15 lots of sneakers and 3 boots. It should be noted that the numbers label the points on the vertical axis, not the spaces between them. Notice too, in a convention used for discrete data, there are gaps between the columns.

A tally chart provides a quick method of recording data as events happen. So if the students are counting different coloured cars as they pass the school, a tally chart would be an appropriate means of recording the data. Note that it is usual to put down vertical strokes until there are four. Then the fifth stroke is drawn across the previous four. This process is continued until all the required data has been collected. The advantage of this method of tallying is that it enables the number of objects to be counted quickly and easily at the end.

In the example above, in the time that we were recording cars, there were 11 red cars, 4 yellow cars, 18 white cars and 5 black ones and 22 cars of other colours. Microsoft Excel is a program available on most types of computers that allows data to be entered onto a spreadsheet and then analysed and graphed very easily.

In mathematics this week we are doing a statistics study on favourites. Could you please help us by filling in the survey form your child has produced to get some data about favourite things?

Figure it Out Links

Some links from the Figure It Out series which you may find useful are: